The Woodbury Cemetery Association held an unveiling ceremony for its new Veterans Memorial on Saturday, June 15.

The stone monument contains the names of 139 veterans of the Civil War, World Wars I and II and the Korean Conflict buried at Woodbury Cemetery.

“We put out a call to our members and those who have family interred at Woodbury Cemetery and we ask them to help us bring about this memorial because we had so many veterans in our cemetery,” said Woodbury Cemetery Association Board member Louise Barnes. “We wanted to honor them. When people found out about it, we got gifts from others and we were able to bring it about.” 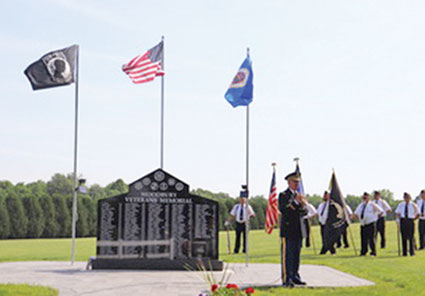 The names are etched on the front of the monument while the back displays an American flag with an eagle flying overhead and two additional names; one of a local veteran buried in Holland and the other of a man reported missing in action in Korea. Two of the names belong to individuals killed in action.

While the memorial does not yet include the names of Vietnam veterans, Barnes said there is room to add them.

“It is a beautiful stone,” she said. “Those who worked on it are to be commended.”

Colonel Lance Kittleson of St. Ansgar and Woodbury Cemetery Association President Ron Peters presided over the unveiling ceremony. The Lyle American Legion Honor Guard held a 21-gun salute, which was followed by the playing of “Taps.”

Police are seeking any information that could lead to the arrest of two suspects involved in a Saturday night armed... read more