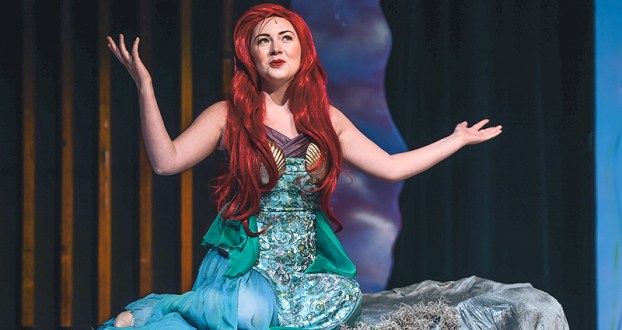 Ariel, played by Chloe Guttormson, rehearses an early scene from “The Little Mermaid,” Tuesday night at Frank W. Bridges Theatre. The play is the first of this season’s Summerset Theatre line-up. Photos by Eric Johnson/photodesk@austindailyherald.com

Under the Sea; Summerset Theatre presents Disney’s ‘The Little Mermaid’

Summerset Theatre will kick off its 52nd season with Disney’s “The Little Mermaid” opening Thursday evening.

“We decided it was time to do a family friendly show and we wanted to get a large cast involved,” said Director Randy Forster. “This is definitely a family fun show; everybody knows ‘The Little Mermaid.’”

Based on the Hans Christian Andersen story, “The Little Mermaid tells the story of Ariel, King Triton’s youngest daughter, who wishes to pursue the human Prince Eric in the world above, bargaining with the evil sea witch, Ursula, to trade her tail for legs. But, the bargain is not what it seems, and Ariel needs the help of her colorful friends, Flounder the fish, Scuttle the seagull and Sebastian the crab to restore order under the sea. 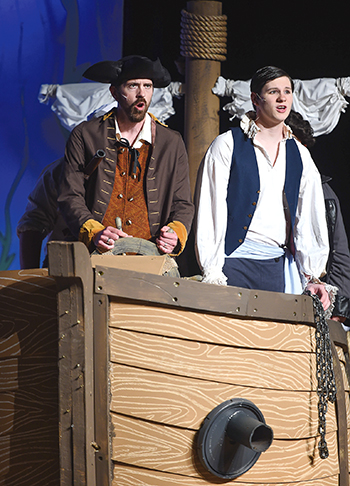 Summerset’s version of “The Little Mermaid” was adapted for the stage from the animated Disney movie. The book is by Doug Wright with music buy Alan Menken and lyrics by Howard Ashman and Glenn Slater.

“This is the Disney version, but it’s a little different from the movie,” Forster said. “There is more music that was added when this was produced on Broadway. For example, Prince Eric has a couple songs that are not in the original animated movie. Ursula has songs, King Triton has a song; there is more music than the original. But, it still has all of your traditional favorites from the animated movie.”

Forster said one of the greatest challenges to the show was creating all of the different worlds.

“We’re under the sea, so we have lots of different sea creatures,” he said. “We had to make mermaids and they have some great costumes. We definitely took our own spin on some of the costumes. We also have scenes on the land and in the palace; we have a huge ship that comes on stage with sailors on board and we have the rock where the mermaid sits, which is iconic from the Hans Christian Andersen story.” 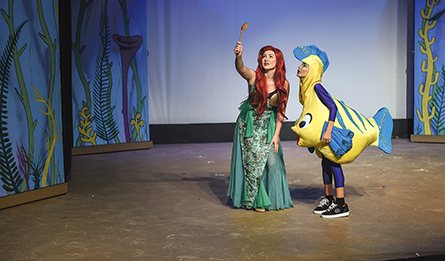 Ariel, played by Chloe Guttormson, shows off a spoon to Flounder, played by Joshua Brooks Tuesday night during rehearsel for the Summerset Theatre production of “The Little Mermaid.”

Forster added that a live orchestra will be performing during the show.

Despite the challenges, the cast has proved more than up to the task.

“There are 40 people in the cast with lots of newcomers,” Forster said. “It’s always exciting to see new comers on the stage.”

Tickets are $20 for adults and $12 for students and children. Season passes, which include tickets for “The Little Mermaid” and “Mamma Mia!” are available for $35. Tickets and passes can be purchased at www.summersettheatre.org or at the box office before the show.

“You will be thoroughly entertained,” Forster said. “The amount of talent we have on the stage is amazing and they tell an amazing, classical fairytale. There might be kids who never go to Disneyworld, but we can bring a piece of that Disney magic to the Frank W. Bridges stage.”