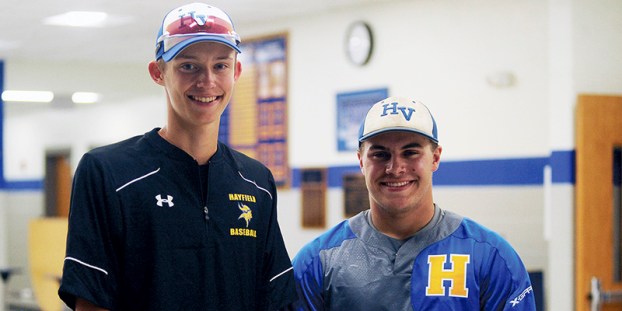 Cousins Mason and Kolby Tabb bring different styles to Hayfield baseball, but they are both driven to win. Rocky Hulne/rocky.hulne@austindailyherald.com

Tapping into the tournament: Cousins provide spark and focus for Vikings

HAYFIELD — The Hayfield baseball team has found just the right balance of seriousness and fun in making its first run to the state tournament in school  history.

That balance of yin and yang is especially apparent in a pair of Hayfield infielders who happen to be cousins. Senior Mason Tapp is a relatively quiet, always focused shortstop who leads the way as the lone senior on the team. Kolby Tapp, a junior left fielder, is a brash, loud talking player who is just as driven to win as Mason. 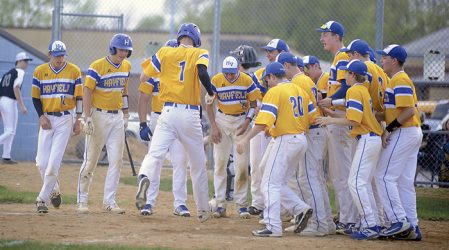 Hayfield’s Mason Tapp is greeted at home plate by his teammates after hitting a two-run homer. Herald File Photo

Kolby usually makes a habit of going over to talk to Mason between innings and those conversations can cover a wide variety of topics. Kolby’s favorite line is to tell baserunners that Mason, who is much taller than Kolby, is his brother.

“We talk about umps and how we’re getting hosed or how we’re not getting hosed,” Kolby said. “We have a good time. I like to yell at him when he doesn’t make a play.”

Mason said Kolby’s energy helps him stay locked in and he feels the team has a great mindset as the No. 3 seeded Vikings (22-2 overall) prepare to open the Minnesota Class A State Baseball Tournament quarterfinals against Scared Heart (13-8 overall) at 5:30 p.m. today, Jordan’s Mini Met Stadium.

Mason has committed to play college basketball at the University of Saint Thomas, but his heart is still with the Hayfield baseball team for at least one more week.

Hayfield, which has won 16 straight games, has developed a resilient attitude this spring. The Vikings trailed in three of their four postseason contests, but came back to win them all. Mason said the team has learned to keep battling, no matter how big the hole.

“Throughout the whole season we’ve always come in, in the later innings,” Mason said. “We never get it into our heads that the game’s over. We always know we have a chance. We keep sticking with it and find ways to win games.” 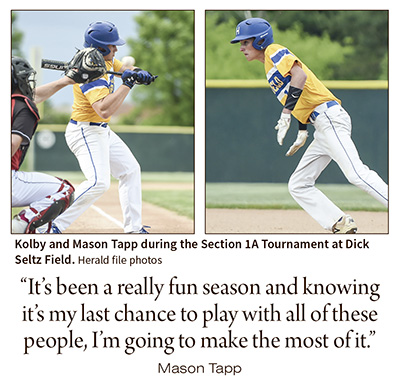 Sacred Heart was one game under .500 with one game to go in the regular season, but it has since rattled off six straight wins — three of which have come by shoutout.

“Their pitchers throw hard, but we’ve faced good pitchers all year. It’s up for grabs,” Kolby said. “I’ve got a good feeling going into it. There’s always the possibility that we’re going to do well and then there’s the possibility of us coming into the game and starting slow. We’ll have to overcome a big obstacle because we’ve never been to the state tournament before and they have. We don’t really know what to expect coming into it.”

Packers will open against Pioneers at state baseball tournament

The Austin baseball team will open with a tough test as the Packers will take on No. 2 seeded Hill... read more