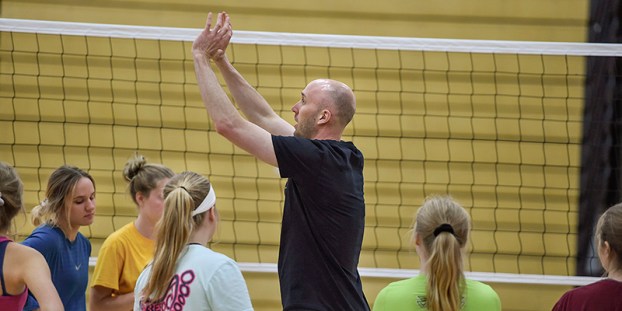 The Austin volleyball team is getting a little help from some elite talent as it is hosting Gold Medal Squared in Packer Gym this week. 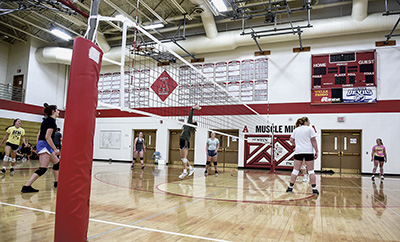 Players run through a drill during a camp by Gold Medal Square Tuesday in Packer Gym. Eric Johnson/photodesk@austindailyherald.com

Throughout his career Poole has seen the game played many different ways. This week he’s been able to show current and future Packers ways to get better.

“We like to teach them a little and let them have fun. We want to show them how to compete and bring up their basic skill technique in passing, setting, attacking and blocking. We want to really take them to the next level,” Poole said. “It’s been amazing. They’re really good at listening and trying to put into practice what we’re teaching them. Their work ethic is incredible and it’s a joy to work with them.”

The camp features players who are entering eighth grade all the way up to players entering their senior season. It has drawn a total of 30 players from the Austin volleyball program, which snagged three conference wins last season, the most Big Nine victories the Packers have compiled since 2009. 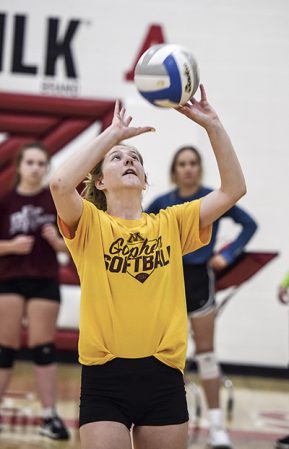 The team is looking for new leaders this summer, but it is also looking to compete.

Elyse Hebrink, who will be a junior this fall, has noticed that it is her turn to be a leader.

“The people in my age group were wondering where everybody was when we walked in here, but they’re all graduated,” Hebrink said. “Pretty soon we’re going to be the upperclassmen. It’s good to start doing things like this when you’re young.”

Kennedy Bell, who will be a sophomore this fall, said the Packers helped set the tone last season and the team is hoping to continue striding forward.

“I feel like we may have a better volleyball future than what we have had,” Bell said. “The coaches (at this camp) are good and I feel like they’re going to teach us good stuff.” 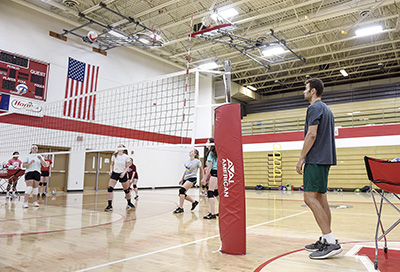 Robert Poole watches the action during a camp Tuesday put on by Gold Medal Square in Packer Gym. Eric Johnson/photodesk@austindailyherald.com

Austin head coach Lauren Cost, who played Division I volleyball at Kansas State, said this week’s camp is important for players to hear about different techniques from different coaches. She also stressed how important the summer is for volleyball players who are looking to get better.

“It’s a challenge. Every coach wants every kid’s time in whatever sport they’re competing in, and the kids need free time to be a kid,” Cost said. “When they get here, we want them to go hard and get as many hits on the ball as they can before the season starts.”