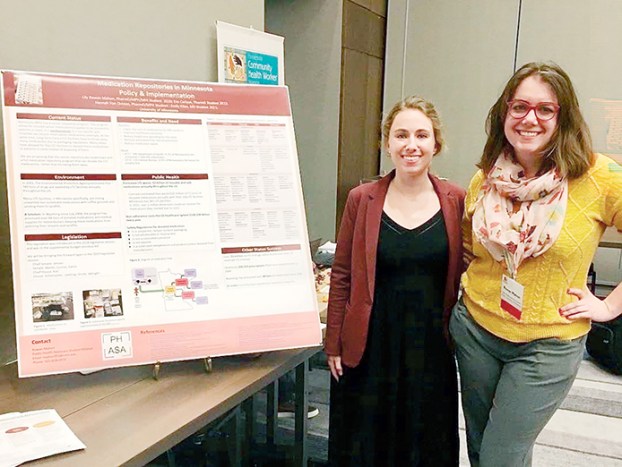 Rowan Mahon’s life is chaotic, like any college student.

She lives in a tiny apartment near the University of Minnesota campus with her two cats — Mulaney and Burnham — named after comedians. She’s a fourth-year student in the College of Pharmacy, meaning she works full time and commutes during the week from St. Cloud. Mahon graduates in a year, and she’s still figuring out what she wants to do next.

But in her limited free time, she has an unusual hobby: she’s trying to get the state’s first real drug repository program off the ground.

It didn’t get much attention, but Minnesota lawmakers passed a plan this spring to set up a program starting next year to take unused medication destined for a flush or the landfill and instead distribute it to people who are struggling to afford their medicine.

“It’s crazy to me that we have so much waste and at the same time people are struggling to pay for their medications,” Mahon said. “I’ve seen individuals come into the ER just because they didn’t have their medications, so their blood pressure was so high.”

Twenty-one other states already have similar programs, and they’re already pulling in millions worth of unused medications. Iowa, which the Minnesota program is modeled after, has managed to repurpose nearly $18 million of medication over the last decade.

Minnesota previously had a version of a drug repository that was narrowly focused on medication for cancer patients, but it wasn’t successful. The law was written in a way that was so restrictive that the few hospitals that expressed interest quickly realized there were almost no drugs that they could take back, said Cody Wiberg, executive director of the Minnesota Board of Pharmacy.

“With the increase in drug prices over the last five or six years, you’re once again starting to get people who can’t afford their medication,” he said. “There’s more of a need for it now.”

Mahon first heard about drug repository programs while she was taking pharmacy school entrance exams. When she moved to Minnesota to attend the university, she was surprised to learn the state didn’t have one. Eventually, she realized a law change was required to get a drug repository off the ground.

The unused medication generally comes from long-term care facilities. Drugs there are packaged by pharmacists in single-use blister packs, which usually contain enough medication for two to four weeks. But if a patient’s prescription changes or if someone dies, the packets don’t get fully used.

“In a lot of places, [they] punch all of these medications out, and flush them down the toilet, or incinerate them or put them in landfills, essentially,” said Hannah Van Ochten, another student at the university’s College of Pharmacy. “If the nurse only administers one pill out of these blister packs, the whole thing has to get thrown away.”

Under the new law, those facilities could instead send the unused pills to a central repository, where they would undergo safety checks.

Once they’re cleared for use, the drugs can be distributed to people struggling to afford their medication. There will be some cost to the drugs, Wiberg said, but the prices will be dramatically reduced for people in need.

“These medications can then go to people who are either in between insurance or just having a really hard time affording one specific medication,” Van Ochten said. “Or just people who can’t afford their medication at this point.”

The students managed to get the proposal included in a budget proposal in 2018, but the 990-page bill also included other policy proposals that former DFL Gov. Mark Dayton didn’t like, so he vetoed it. They came back to push for the bill again this year, and they got creative this time. They stuffed 30-day pill packets with M&Ms and left them with legislators. They enlisted students from other programs to call their legislators.

GARDNER, Kan. — A cat named Meow has been reunited with her suburban Kansas City owners after she went missing... read more