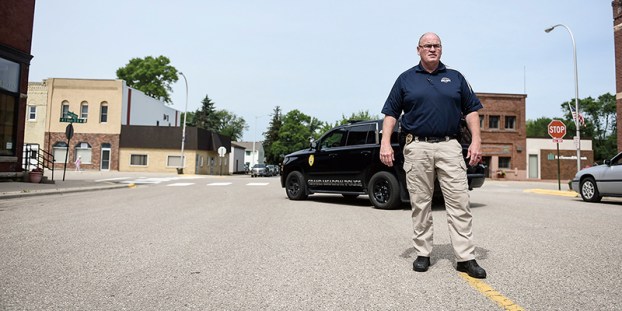 Grand Meadow Police Chief Jim Richardson stands downtown Friday morning, at the heart of the community he loves and serves. Like many small town forces, Richardson and Grand Meadow often have to deal keeping trained officers on payroll. Eric Johnson/photodesk@austindailyherald.com

The move came after Adams was unable to find a qualified candidate to replace the retiring interim Adams police chief.

“Adams approached us several months ago about the possibility of contracting for law enforcement services,” said Mower County Sheriff Steve Sandvik. “The county administrator and I went down and gave them a presentation on what we’re doing in LeRoy, which is what they requested. At that time they decided they would continue in their search for a police chief and maintain their own department. Several months later, we were contacted again and they said they had come to the conclusion that they wanted to contract with the Mower County Sheriff’s Office for their law enforcement services. We went down with a formal contract for them and they agreed to it.”

Under the contract, Mower County deputies will work a minimum of 60 percent for eight hours a day, seven days a week in Adams, meaning a deputy’s presence is not required at all times. Sandvik hopes to put LeRoy and Adams contracted deputies on opposite shifts. 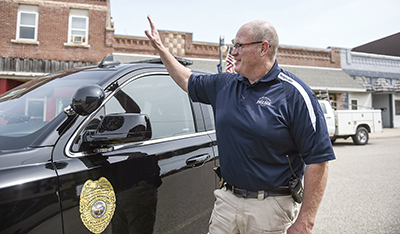 “I’ll have one in LeRoy and one in Adams, which is more central,” he said. “Those are bodies we can pull for emergencies and make it easier for us to manage and make it a more desirable shift.”

The lack of qualified law enforcement candidates is a problem many departments are facing nationwide. Sandvik said the county has agreed to allow the MCSO to hire another deputy, but staffing is still inadequate.

“In Adams, since January of this year until the time we contracted, we had responded solely as the Mower County Sheriff’s Office to 153 calls within the City of Adams,” Sandvik said. “Adams (PD) had 52 calls they did themselves.”

“Minnesota law requires municipalities to provide law enforcement services,” he added. “The Sheriff’s Office provides township services, but we always have and always will offer our services to the municipalities.”

Several small towns in Mower County do have small police forces, but their hours are limited to regular shifts. When officers are not on shift, Sandvik said the MCSO takes on law enforcement duties in those towns.

The ability to attract qualified candidates is a problem that Grand Meadow Police Chief Jim Richardson knows all too well.

“Right now we have four (officers); I try to constantly keep four on,” he said. “Over the years I’ve been the chief in Grand Meadow, I’ve hired about 35 officers. Approximately 30 of them have continued on in law enforcement. That’s always been a struggle for small towns in general.”

All four officers under Richardson’s command are part-time, many of whom want to move up to full-time. Grand Meadow has been able to utilize grant money provided by the State of Minnesota to help cover the cost of training new officers. Richardson also has good relations with the law enforcement staff at Riverland Community College and Rochester Community Technical College.

“I know the administrators and instructors and I usually get the best (students),” he said. “But that’s also a problem because they’re gone early. But, for a time period, I enjoy coaching new officers.”

“I’d be blessed to have them for a year to two years,” he added. “I feel if I can get them past two years and then they get a job, we’ve gotten our moneys worth.”

The GMPD and the MCSO both face the issue of response times, which are increased due to the large coverage area and lack of law enforcement agents.

“Austin gets so busy that the county helps them,” Richardson said. “We know where the most problems are, so there are times when we’re working a situation and it could be 15 minutes until back up. Some nights we’re lucky because there are a lot of deputies, but sometimes there is just one in a certain shift before others come on.”

“(Response times are) difficult,” Sandvik said. “Smaller populated counties, Dodge and Fillmore in particular, typically have five or six people on at night, the majority of which are covering their contracted towns. They do almost all of their towns as contracted law enforcement and that gives them a much larger number of deputies. They can position them around these towns and pull them when you have a call. That’s one of the things I’m looking at in the big picture. I would like to improve upon response times. Ultimately, if we have more people, we can position them and give them more of a response area in the county, but at this point we don’t have the numbers to do that.  Unless you’re assigned to a contract town, you’re typically going from one end of the county to the other.”

“It’s common knowledge the county is understaffed; they need about two more deputies just to keep up,” Richardson said. “There are times when the Grand Meadow Police Department has the only officer on the east side of the county. I’m not nervous about that, but the response time for all of us is crucial.”

Aside from covering much of eastern Mower County, Grand Meadow officers have also found themselves responding to calls in Stewartville and Fillmore County.

“One of our mandated rules is we need to be called out,” Richardson said. “I tell the officers if they hear of a call in LeRoy or Racine to be ready to go in that direction, but for liability reasons we need to be called out. It’s not uncommon for us to go help in LeRoy, Racine, Dexter and Adams. On top of that, if there is a call for mutual aid in Austin, or in Stewartville, we’ve covered that in the past. We’ve gone to Fillmore and they’ve come to us too. Once we get called out and asked for help, jurisdiction is not an issue.”

Richardson said that he hopes to add a full-time officer to his staff, which he has been working with the Grand Meadow City Council to fulfill.

Despite the shortage, Richardson has not felt the need to contract with the county.

“They had a contract earlier in the 80s,” he said. “Our mayor two terms ago looked into it and brought it back to the council, but it just didn’t fit with their vision for the community.”

Part of the reason is the sense of community in places like Grand Meadow.

“Over the course of my 24 years, we’ve never had any use of force issues,” Richardson said. “I’m talking to kids whose grandparents I dealt with as a kid. I’ve got a history. So if something might happen, I can go talk to people and get good information. It makes the town very efficient.”

“I’m very excited about how Grand Meadow has grown these past 10 years,” he added. “We have the new school and the addition of the SEMA plant. (Grand Meadow) has a bright future and that’s what’s exciting about being a small town cop, seeing the streets going in and houses being built.”

But until more officers and deputies can be hired, law enforcement must make do with what they have.

“Towns like Dexter, Waltham and Sargeant, they pay county taxes just like Grand Meadow does, and I personally, as a tax payer, have an expectation of coverage myself,” Richardson said. “It’s a 24/7 job, no matter where you’re at. Austin and the county’s detectives are working non-stop. It’s not going to end and we can definitely use the public’s help by just using your eyes and ears. If you see something odd, take the information down and call right away.”