SMART Transit to raise fees in 2020

SMART Transit has announced that it will be adjusting its rates starting early next year.

SMART will be boosting its rates on most services except student rates, which will remain $1. Children five and under will remain free of charge. The change over will be Jan. 2, 2020.

This is the first time SMART Transit has increased rates in the counties it serves since it began operation; however, the increased fares are needed to meet increased costs.

Kirk Kuchera, transit manager for SMART Transit, said in a press release that they will be working with members of the communities they serve over the coming months to educate passengers and citizens on the increase and why it is needed. 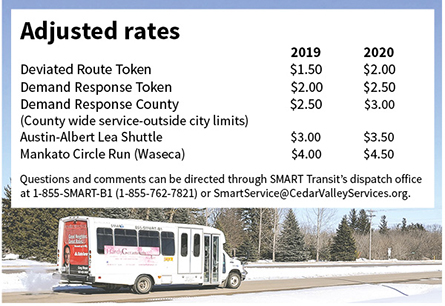 Gordon To further answers to cancer and honor the memory of their beloved son, husband, father, brother and friend, the... read more