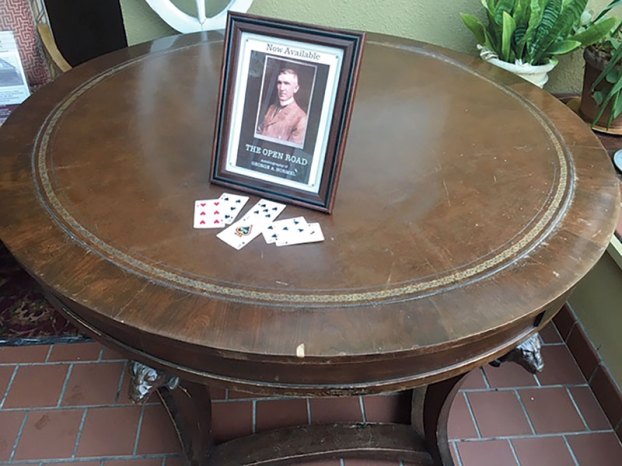 Although I am not sure George and Lillian would approve, we have a new family artifact on display in the Hormel Historic Home Atrium.

The Mower County Historical Society has gifted to our collection a card playing table that once belonged to Jay Hormel. I say George and Lillian most likely wouldn’t approve of such a piece of furniture in their home because George, based on personal experience, saw the dangers of a life filled with gambling.

There are several accounts written by, and about, George’s life with cards. From “In Quest of Quality” by Richard Dougherty:

“He developed a keen liking for the game, and acquired skill at it. Starting out with penny ante, he eventually found himself in games with sizable stakes. While on the road for Oberne-Hosick he played regularly and often, but his winnings never quite matched his losses, so that despite his years of good earnings he saved nothing.”

In the anonymously written “A Business is Born,” George is described as:

“a proficient poker player, if such a person ever lived … During those days any person who had any kick in him played poker, and while Geo. A. Hormel made resolution after resolution to quit the game he just didn’t seem able to quit. He stated in later years of the two evils, he would prefer fighting a whiskey habit to a poker habit because once the itch to play takes hold of one, he is lost..”

George wrote in his autobiography, “The Open Road”:

“…poker served a purpose. I began to see what a life on the road, with no anchors to windward, would do to me if I continued indefinitely this pleasant here-today-and-gone-tomorrow existence…Even if I won, the game consumed time I could put to better use. Nevertheless, I continued to gamble, doubtless because the egoistic urge to get something for nothing was stronger than the accumulating evidence that it couldn’t be done… It was novel and I was young, but when I began to examine critically my older colleagues, I could see what it had done to them. Most of them had become accustomed to a life which unfitted them for any other sort.”

Because the newly acquired table is said to have belonged to Jay Hormel, it is likely that he enjoyed a hand or two with friends. George’s own father advised him not to play, and I would guess that George shared that wisdom with his son, Jay. I don’t have stories or words from Jay about the topic, but as some say, business takes place on the golf course, and I would venture to say, around the card table.

A standing tradition at the HHH. Led by Brian Koser, the band will feature a lively set. They will be joined by Adam Meckler on trumpet. Free