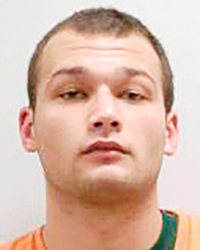 A Rochester man has been charged with stealing a vehicle and assaulting an officer after being arrested Sunday afternoon.

According to the court complaint, a Mower County deputy observed a 2013 Ford Fusion going 68 in a 55-mile per hour zone at about 12:40 p.m. on Sunday on County Road 14 in Bennington Township. The deputy observed the vehicle crossing the fog line and initiated a traffic stop. He then made contact with the driver, Bouchie, who told him he did not have a license.

The deputy ran Bouchie’s information and learned that he was on probation for driving while impaired and that his driving status was cancelled. Bouchie was then arrested.

On Monday, the Rochester Police Department contacted the Mower County Sheriff’s Office and informed them the Ford had been stolen out of Rochester.

Arrangements were then made to return the vehicle.

A Mower County sergeant was dispatched to the Mower County Jail later in the day to investigate a report that Bouchie had assaulted a detention sergeant. It was reported that Bouchie was “acting out” and had been moved from general population to a holding cell. While in there, Bouchie put his hands through the food slot and would not remove them when told to do so. The sergeant then informed Bouchie that he would be sprayed with a chemical irritant if he did not comply. When Bouchie did not comply, the officer sprayed him.

Bouchie then blocked the cell door with his blanket and bed mat and refused to move them. The sergeant warned that Bouchie he would be tased if he did not comply, but Bouchie continued to block the door. The sergeant then opened the door and attempted to use the taser without success. Bouchie then began punching the sergeant on the left side of the jaw before other jailers intervened.

Two detention deputies said they saw Bouchie strike the sergeant. They also said that Bouchie had threatened to injure jailers earlier in the day.

Bouchie will appear in court again on June 17.

Highway 16 traffic from Spring Valley to Highway 63 is scheduled to reopen beginning June 10, but a short-term detour... read more