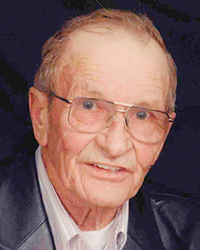 Robert was born May 29, 1935, in Dexter, Minnesota, to Isidore (Genevieve) Ulwelling. He grew up on the family farm near Rose Creek, graduated from Rose Creek High School, and lived on the farm all his life.

Robert proudly served his country during the Korean War. He was a self-taught machinist and welder. Robert generously shared his knowledge, taking time to crack a joke and share in the laughter with family and friends. On Nov. 11, 1996, he was united in marriage to Jo Anne Elleby at St. Peter’s Catholic Church in Rose Creek. Robert and Jo Anne spent the last 24 years fishing, raising beef cattle, traveling, and collecting and restoring antique tractors. They participated in numerous tractor shows and events and spent their golden years together, being the happiest their families had ever seen them. Robert was a member of St. Peter’s Catholic Church and numerous Oliver and International Harvester clubs. He always said his favorite tractor was the one that started first.

A funeral Mass will be celebrated at 10:30 a.m. on Thursday, June 13, 2019, at St. Peter’s Catholic Church in Rose Creek with Father Swaminatha Pothireddy officiating. Friends may call from 5-7 p.m. on Wednesday, June 12, 2019, at Mayer Funeral Home and for one hour before the service on Thursday at the church.  Interment will be in St. Peter’s Cemetery. Condolences may be left online at www.mayerfh.com.