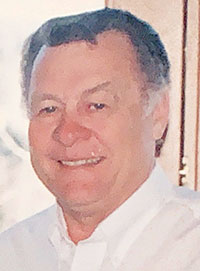 Robert Eugene Long was born Dec. 23, 1937, to Thurston and Irene (Rowe) Long. He attended school in the Wykoff, Minnesota, area. He was united in marriage to Kay Gartner on Aug. 31, 1956, in Providence, Rhode Island. Together they had a son, Curt, and a daughter, Joy. Robert served in the U.S. Navy from 1956-60. He worked in Blooming Prairie, Minnesota, as a cable splicer for a telephone company, worked for Hormel for nine years, and then later started his trucking career. Robert started his own trucking firm, R.E.L. Trucking, in Cumberland. His passion was driving and buying trucks.

He is survived by his wife, Kay Long of Cumberland; his son, Curt (Debra) Long of Katy, Texas; four grandchildren, Curtis Long, Ashlee Long, Cassie Brown and Eric Brown; three great-grandchildren; and many nieces, nephews and cousins. He was preceded in death by his parents; his daughter, Joy Renae Brown; five sisters, Nellie, Eleanor, Ella, Ilene and Florence; and three brothers, Johnny, Bill and Thurston Jr.

Memorial services will be held at 1 p.m. on Saturday, June 22, 2019, at Hindt Funeral Home in Spring Valley. There will be a celebration of life at the VFW Hall following the service. Condolences may be left at www.Hindtfuneralhomes.com.