Ricky Earl Voigt, 61, a life-long resident of the Preston, Minnesota, and Spring Valley, Minnesota, areas, passed away peacefully on Monday, May 27, 2019, surrounded by his family at Edenbrook Healthcare Facility in Rochester, Minnesota. 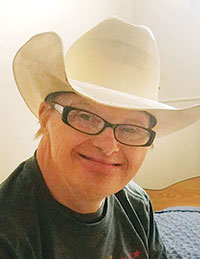 Rick lived on the family farm near Preston, where he was active in the farming operation until 2003, when he moved to Spring Valley into a home provided by Cardinal of Minnesota. Rick loved the farm and was involved in numerous activities.  He participated in tractor pulling contests, hunting, horse plowing events, and riding and driving horses, which were his passion. He was employed at the DAC in Preston and took the responsibilities of his job very seriously—he was dedicated and rarely missed a day of work. In addition to working at the DAC, Rick started a saddle cleaning business on the family farm where customers would bring their saddles to have them detailed. Rick loved people and if you met Rick you had a friend—he would often walk up to a complete stranger, shake their hand and say, “Hey, I know you!” Rick was a forgiving person who showed love to everyone.  He never held a grudge and always forgave any wrong done to him—the world could learn a lot from him. He had an uncanny memory and would always surprise people with information he remembered from previous decades. Rick loved to tell people, “My birthday is coming up!” His birthday was March 14, and it was mandatory that the entire family celebrate this national holiday. He was a special part of our family that will be dearly missed. What a blessing to know that Rick is spending eternity in Heaven with Jesus, his Lord and Savior who has prepared a place for him.

The family would like to express sincere appreciation to Sharon McNeil and Cardinal of Minnesota, who provided a loving home in Spring Valley for Rick for nearly 15 years. Sharon was like a second mother to Rick. A special thank you is also given to: Kelly, the staff, and all the workers at the DAC in Preston—Rick loved you guys, the staff and residents at Edenbrook of Rochester, where Rick spent his last six months—the love and care that you demonstrated to Rick were blessings his family will never forget.

Rick was preceded in death by his parents, Leonard and Ruby Voigt; and two sisters, Nita (Robert) Soltau and Peggy (Ed) Case. He is survived by four siblings, Wayne (Barbara) Voigt, Cheryl (Richard) Case, Kevin (Nancy) Voigt and Tim (Ellen) Voigt; 19 nieces and nephews; and a multitude of friends.

The family would like to invite you to a special time to celebrate Rick’s life at 6 p.m. on Friday, June 28, 2019, at the Valley Christian Center in Spring Valley, where Rick was a faithful member for over 40 years. Pastors Tim Wilson and James Leonard will officiate. A meal will be provided. Online condolences may be left at Hindtfuneralhomes.com.

Tony Christopher Green, 52, died Tuesday, May 28, 2019, at home in Austin, Minnesota. Service: A memorial service will be... read more