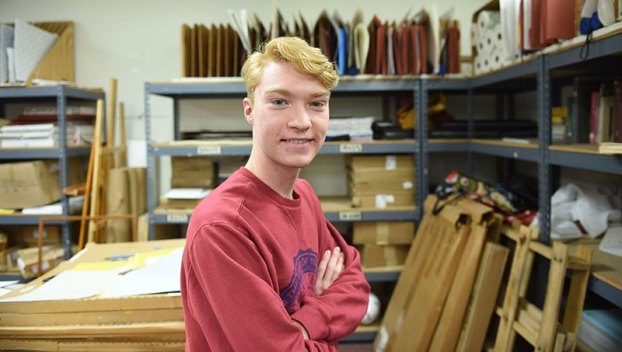 Tyler Quitmeyer, who was named Austin High School’s 2019 Artist of the Year, has been in Washington D.C. to celebrate his piece that was chosen as the winner of the Congressional Art Contest. Herald file photo.

Tyler Quitmeyer, who was named Austin High School’s 2019 Artist of the Year, has been in Washington D.C. to celebrate his piece that was chosen as the winner of the Congressional Art Contest.

On Monday morning, Quitmeyer and his mother and brother flew into Washington D.C. and met with Rep. Jim Hagedorn (MN-01) and got a chance to tour several monuments and buildings during his visit. In the tunnel connecting the Cannon House Office Building to the U.S. Capitol, Quitmeyer’s piece is hanging for all to see.

“All American” was a colored pencil drawing that Quitmeyer created. It depicts a man wearing a denim jacket with pins adorning the jacket representing each of the 50 states.

Quitmeyer walked with Hagedorn and his mother and brother and had the chance to see his piece hanging in the tunnel. 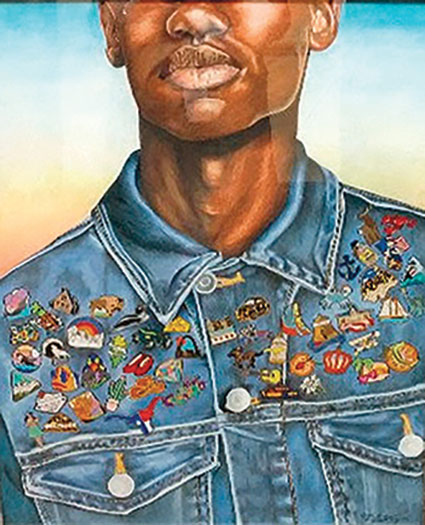 Tyler Quitmeyer’s piece titled “All American” won the Congressional Art Competition, and will be displayed for one year at the U.S. Capitol in Washington D.C. Photo provided.

“It’s really cool to see it next to other great artists’ work, not just from Minnesota, but from across the country,” he said. “I’m really honored to be a part of that. It’s so cool to think that every congressman and woman is going to walk past it on their way to work. Meeting Rep. Hagedorn and walking with him in that tunnel is cool, and getting to have that personal connection in hearing what he thinks walking through that same tunnel.”

When Hagedorn saw Quitmeyer’s piece, he realized the symbolism of the various pins on the subject’s jacket that represented all 50 states in the United States.

“I saw a loon, a horse that would be Kentucky, and a lobster and I thought ‘it must be Maine.’” he said. “It was very detailed and thoughtful. I think it was obviously highlighting all the great things about an individual American and the individual states in our country. Tyler is a very talented young man.”

Each year, government officials work through the art communities and school districts in the areas they represent to promote the art competition. The winner is chosen from a group of entrants.

“Tyler did a great job and was the best this year,” Hagedorn said. “This competition was all designed to highlight excellence in the arts and we want people to consider it, work toward it and doing something for culture and expression in really a very critical piece.”

Quitmeyer got to enjoy a reception with his family and will be heading off to France to visit family and friends he made during his study abroad experience. This fall, he will be attending Carleton College to study biology.

“Tyler is very talented, and we could see that,” Hagedorn said. “I can see a really bright future ahead for him.”

Although I am not sure George and Lillian would approve, we have a new family artifact on display in the... read more