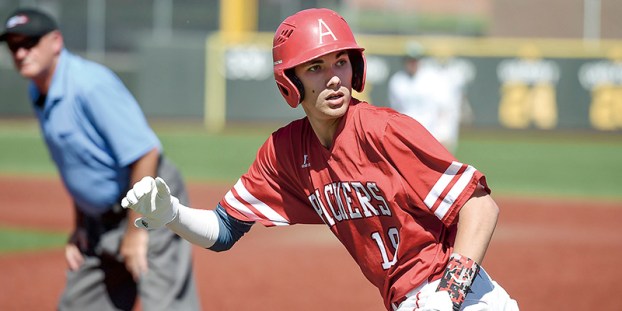 Austin’s Dawson Mills looks back for the ball after it skipped past the Hill Murray first baseman during the MInnesota Class AAA State Baseball Tournament at Siebert Field Thursday at the University of Minnesota. Eric Johnson/photodesk@austindailyherald.com

After struggling for much of the day at the plate, the Packers broke through at the right time to oust No. 2 seeded Hill Murray 3-1 in the Minnesota Class AAA State Baseball Tournament quarterfinals at Siebert Field in Minneapolis Thursday.

Hill Murray pitcher Mitch Gutknecht used an effective curve ball to keep Austin off-balanced for much of the day as he struck out eight and allowed just three base runners in the first five innings, but the Packers (15-8 overall) struck gold in the sixth inning. After loading the bases with no outs on a single by Riley Wempner, a walk by Hunter Guyette and a single by AJ Mueller, Austin took the lead for good when Hovland delivered a two-run single to left. Nate Murphy added an RBI single to make it 3-1. 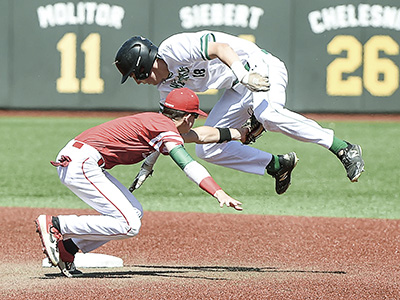 Austin’s Tony Ciola puts the tag on a leaping Jack Schwartz of Hill Murray during the Minnesota Class AAA State Baseball Tournament Thursday at Siebert Field on the campus of the University of Minnesota. Eric Johnson/photodesk@austindailyherald.com

Murphy broke the ice for Austin with a double in the fifth, but he was stranded at third in that frame. He also made a running catch in left field to end the game after Hill Murray had put together back-to-back two out singles and a walk to load the bases.

Murphy, a former pitcher who sustained an injury last year, has found a way to help the Packers with his bat and glove this postseason.

“We’ve been working for this our whole lives. We came into this tournament ranked pretty low. Nobody really expected us to do this, but we just came out here, played our game and did what we’ve done all year,” Murphy said. “That pitcher was good. He shut us down. To come out and start hitting the ball was a good feeling. We just had to pick up on what he was throwing and when he was throwing it.”

The Pioneers (17-9 overall) grabbed early momentum when Jack Schwartz drove in a run with one out in the bottom of the first to make it 1-0. HM loaded the bases with two outs after drawing three walks in the second, but Hovland forced Matt Fleischhacker to ground out to escape the jam. 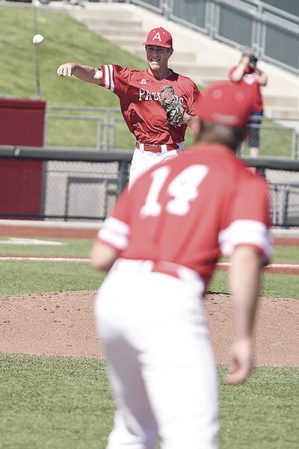 Hovland, a sophomore, pitched five straight scoreless frames before Hunter Guyette came in to get the final out in relief.

“It was definitely a lot of pressure and a lot of nerves going on. As the game went on, I kind of settled in,” Hovland said. “I was just trying throw strikes and make them hit it early on. Eventually I started getting my off speed pitches down.”

Austin’s defense made some big plays in the win as Dawson Mills, a former catcher, was steady at third base. Mills converted a big double play on a catch and throw to end a Hill Murray threat in the sixth.

“Teyghan pitched great. I wouldn’t say he had his best stuff tonight. I thought his off-speed stuff was a little off,” Austin head coach Joe Kroc said. “You’ve got to give some credit to the guys behind him too, they played their butts off. Dawson made two or three legit plays and Riley Wempner made a legit play in the hole. It was a total team win.” 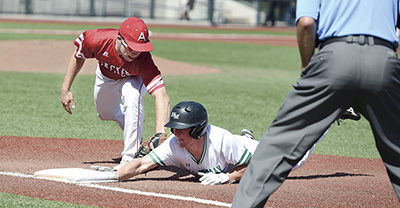 Austin first baseman AJ Mueller slaps a tag down on a pick-off attempt from home in the Minnesota Class AAA State Baseball Tournament quarterfinals Thursday against Hill Murray at Siebert Field at the University of Minnesota. Eric Johnson/photodesk@austindailyherald.com

Kroc credited Murphy for breaking the ice against Gutknecht with his fifth inning double.

“It wasn’t our best approaches at the plate in those first four innings,” Kroc said. “When Nate hit that one down the line, it kind of clicked that we needed to go the other way. (Gutknecht) was really good at keeping his off-speed pitches down and luckily we got to him.

Austin will now take on No. 3 Saint Thomas Academy in the semifinals Friday at 2:30 p.m. at Siebert Field. 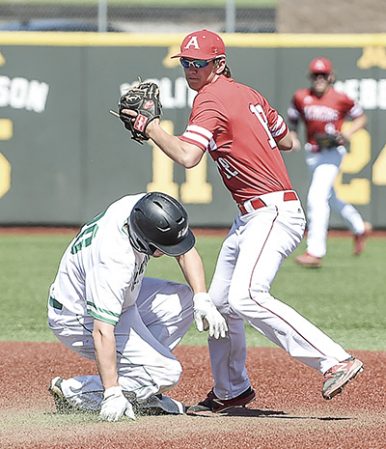 Austin’s Riley Wempner looks to first after getting the force out against Hill Murray in the Minnesota Class AAA State Baseball Tournament quarterfinals Thursday at the University of Minnesota’s Siebert Field. Eric Johnson/photodesk@austindailyherald.com

Tuesday, Gov. Tim Walz signed the Agriculture, Rural Development, and Housing budget in a ceremonial signing with representatives from all... read more