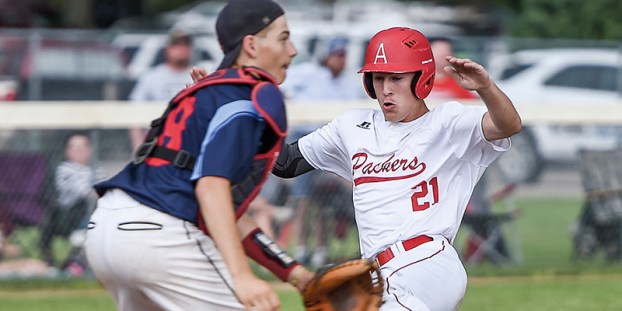 The weather was the only thing that stopped the Austin baseball team Tuesday evening as the Packers were on the verge of clinching their first trip to state in 29 years at Marcusen Park.

Austin had just taken a 5-0 lead on Albert Lea in the bottom of the third inning of the Section 1AAA finals when stormy weather put the game into postponement.

Play will resume at 5 p.m. today at Marcusen Park. There will be no admission fee for the game.

The Packers had all the momentum as Tony Ciola had just knocked in a pair of runs, but now they’ll have to wait a little longer to try and make school history.

“We talked about keeping the mentality that it’s a 0-0 game. It was a great start for us offensively and defensively,” Austin head coach Joe Kroc said. “We’ll have to stay aggressive at the plate and keep throwing strikes on the mound.” 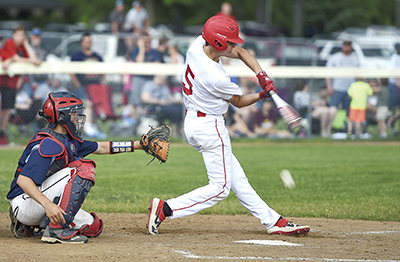 Tony Ciola beats the ball into the dirt against Albert Lea in the Section 1AAA finals Tuesday at Marcusen Park. Eric Johnson/photodesk@austindailyherald.com

Austin took a 3-0 lead in the first inning when Hunter Guyette doubled in a run with one out and Michael O’Connor and Teyghan Hovland converted two-out RBI doubles.

Ciola scattered a hit and a walk in three shutout innings for the Packers.

Austin’s seniors do not have school Wednesday and the rest of the players will have a half day, but Kroc is hoping to keep things as normal as possible.

“We’ll try to keep it just like a regular game with warm ups and everything,” Kroc said. “Our guys have been locked in here in the playoffs and the mentality has been great. I can’t say enough of that. I’m expecting.“

Austin will have all of its pitchers available for Wednesday.

If the Packers hang on and beat the Tigers, they are headed to state for the first time since 1990. If they lose, they will have one more game to try and get to state.

Hayfield baseball team rained out in Section 1A Finals

The Hayfield baseball team will have to find some offense if it wants to earn its first trip to state... read more