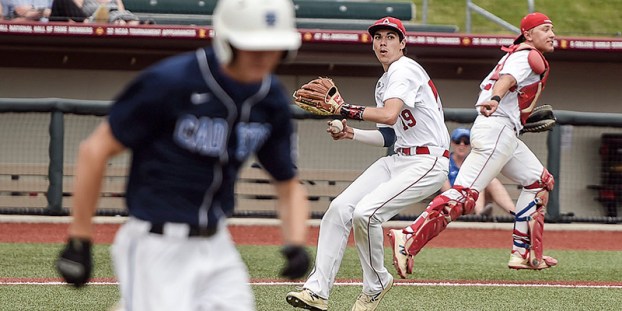 MINNEAPOLIS — Austin was on the verge of a gigantic comeback when things took a turn in the wrong direction as they were knocked out of state title contention in a 9-5 loss to No. 3 seeded Saint Thomas Academy in the Minnesota Class AAA State Baseball Tournament Siebert Field at the University of Minnesota Friday.

The Packers bounced back and beat top-seeded Monticello 5-1 to take third place in Class AAA, but the loss against the Cadets (20-9 overall) kept the Packers from playing in the title game in Target Field on Thursday. 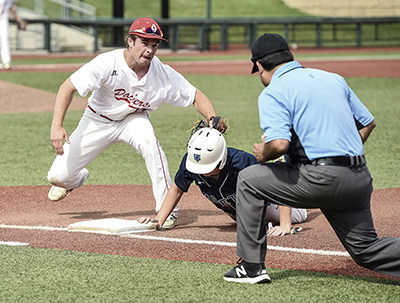 Austin’s AJ Mueller looks to the umpire for the call on a pick-off attempt against St. Thomas Academy in the MInnesota Class A State Baseball Tournament at the University of Minnesota’s Siebert Stadium. Eric Johnson/photodesk@austindailyherald.com

After trailing by six runs, the Packers had the tying run on second base with no outs in the bottom of the sixth inning when Dawson Mills popped up up a bunt that turned into a double play and ended the threat. STA came back to score three runs off of one hit, four walks and an Austin error in the top of the seventh inning to ice the game.

“It just sucks to see everything snow ball like that. There’s not much more to say,” Austin senior first baseman AJ Mueller said. “It kept rolling for them and every time we felt like we could get momentum at all, they’d take it right back.”

The Packers came roaring back into the game after Joseph Goulet doubled in a run to put the Cadets up 6-0 in the top of the fourth inning. Michael O’Connor singled in a run and Teyghan Hovland doubled in two runs to make it 6-3. Hovland came through again in the sixth inning as he hit a two-run homer to make it 6-5 in the sixth.

“It was up and down. We were just trying to fight back in it,” Austin senior Andrew Schumacher said. “I knew we wouldn’t stop fighting after being down 6-0. We always have that fighting attitude, but they’re a good team and they kept hitting.”

Austin (16-9 overall) had played clean baseball for much of the postseason, but the Packers committed three costly errors in Friday’s loss, leading to four unearned runs for the Cadets. 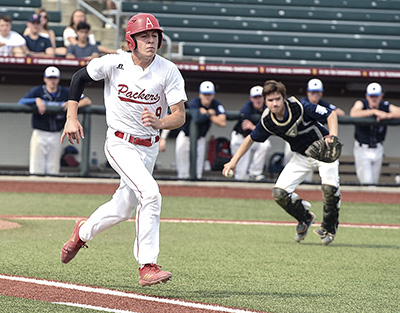 “I don’t think it was pressure. It’s just sometimes you get the job done and sometimes you don’t,” Austin head coach Joe Kroc said. “Yesterday we made a lot of really nice plays and today for whatever reason, we didn’t make them. That’s baseball.”

Austin had 10 seniors on its roster and Kroc said the group did some big things for a program that hadn’t played in a state tournament since 1990.

“I can’t say enough about the kids. I thought we had them on the ropes there for a little while, but unfortunately we didn’t execute and didn’t get the job done,” Kroc said. “I’m proud of our guys for battling in the state tournament with a really good team on the other side.”

Mueller hit a two-run homer in the first inning of the third place game against Monticello and Michael O’Connor allowed just one run in six and two-thirds innings to grab the win.

Playing in the state tournament was the perfect icing on the cake for the Austin senior class.

“We were the first Austin team back here in 29 years,” Schumacher said. “That’s something to be proud of. I got to play at Siebert Field with these boys and it’s been fun. I’ve had 11 years with these guys.” 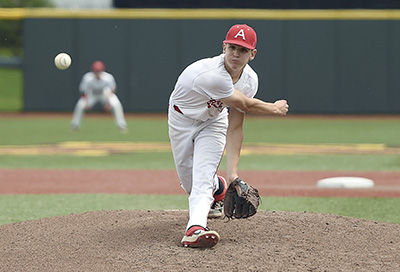 The Hayfield baseball team showed off its pitching depth as it snuck past South Ridge 6-5 and beat Randolph 16-5... read more