Lia Culbert is a person who acts when something troubles her.

She said in her early 20s, when she worked at the truck stop east of Austin with her sister, she was aware of  “Lot Lizards,” women who worked as prostitutes for the truck drivers, but she didn’t think much about their ages or their situations. 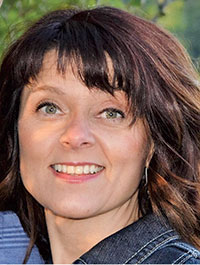 Through the years, Lia also was aware of human trafficking that went on in the Twin Cities.  It was not until  2007,  when she read of a brothel being raided only a block from her home here in Austin, that she realized the idea of these girls and women being exploited troubled her so much that she needed to act.

Since that time, Lia has been working hard to educate herself about this issue and has been a volunteer community education speaker with Mission 21, a faith-based non-profit working to help those being sex trafficked.

Lia has been mentored by Stephanie Holt, the woman who started and built this organization, and by former Community Education Director Kimber Schletty (who along with help from The Sisters of St Francis of Assisi, compiled the statistics used in the community education classes.)

Mission 21 started out providing services for victims 16 and under, but has expanded to serve female and male children, up to age 21, who are victims of domestic minor sex trafficking or commercial sexual exploitation Their services include a Survivor Support Group, whose activities include: opportunities to process past experiences, life and work skills classes, art and music activities, opportunities to meet with other survivors, opportunities to set goals and encourage each other to make healthy choices and be restored mentally and spiritually and re-enter society as survivors.

“Mission 21 does not require any sort of religious belief from participants in our program but offer spiritual components as an option on a case-by-case basis,” Culbert said.

They also offer “Word on the Street” or “WOTS,” a prevention curriculum. “Word on the Street” is designed for youth ages 13-18. This curriculum incorporates a combination of instructional time, discussion, group activities, videos, music, games and hands-on activities. Topics covered include: an overview of what commercial sexual exploitation ​is, risk factors​ that make a person vulnerable to exploitation, recruitment tactics ​of exploiters, healthy vs. unhealthy relationships,  and empowerment.​ Mission 21 works with welfare agencies to find foster care, or other services, if needed, for the clients who are referred to them by law enforcement agencies.

Mission 21 also works to make people aware that human trafficking goes on everywhere and encourages people to be on the alert in order to report suspicious behavior.  Lia is especially proud that this organization, that is so close to her heart, was influential in passing the Safe Harbor/No Wrong Door Legislation in Minnesota, which is designed to exempt children from prostitution prosecution, train law enforcement and others on how to identify and assist victims, increase the legal penalties for traffickers and commercial sex abusers and promote the development of a statewide system of care.  This legislation explicitly treats exploited children as victims rather than as criminals.

Lia has spent most of her life in Austin. She has given lots of her time to theater and musical activities in the community, and with her husband, Jason, israising a son (Owen, a senior at Austin High School) and a daughter, (Olivia, a junior at Pacelli Catholic Schools). Lia is employed at Stadheim Jewelers.

As a result of all her research about human trafficking and the national and international meetings that she has been able to attend, Lia is returning to school. Her plan is to get a degree in social work so that she can work in some area that will continue her fight against human trafficking.

Echoes from the Loafer’s Club Meeting I hate Mondays. This isn’t Monday. I hate days that pretend to be Mondays.... read more