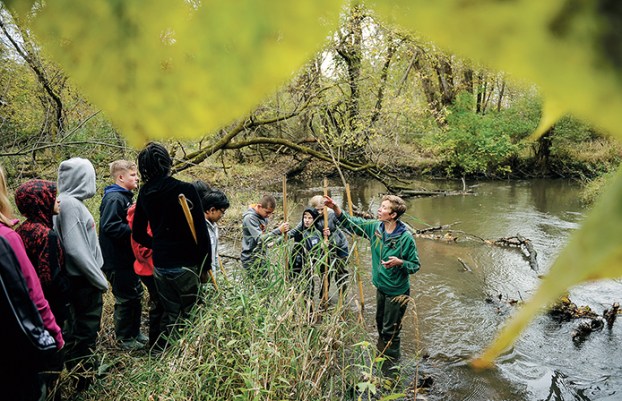 The Jay C. Hormel Nature Center’s Maria Anderson instructs seventh-graders on how they will net the critters of Dobbins Creek in this 2017 file photo. Herald file photo

Nature deficit: Kids have much to gain by going outside

Screens, homework and highly structured lives are changing childhood in such a significant way that scientists and advocates have given the phenomenon a name: nature deficit disorder.

Nature deficit disorder isn’t meant to be a medical diagnosis. Rather, it’s a term to describe how people — especially the past generation of kids — are spending less time outside and lack a connection to nature.

While the word “deficit” implies negativity, people who study nature deficit disorder see great opportunity in addressing the concerns with a lack of exposure to the outdoors.

Advocates and experts say that getting kids more engaged with nature holds potential to boost their physical and mental health, support healthy development and improve academics. Plus, time outside can help make them become good stewards of the natural environment.

There’s a growing body of research on health benefits of being outside.

“There are numerous studies now that show it reduces anxiety, it reduces stress, actually lowers your heart rate and your blood pressure,” Mylan said.

The Children and Nature Network has a searchable database of third-party studies and the nonprofit has done some analysis of its own, too.

Among its findings: time outside in sunlight can reduce nearsightedness and increase vitamin D levels. More physical activity playing outside can reduce the risk of obesity, as well as stress, anger and aggression levels.

Some doctors are even prescribing nature to patients to help treat chronic conditions.

The Children and Nature Network found academic benefits from spending time outside, too. They include better performance in the classroom, better focus and attention, decreased ADHD symptoms and more desire to learn.

Mylan said time in nature has a greater impact on kids who grow up in the “most-stressed” communities with little access to natural spaces benefit the most when they do get time outside.

It’s critical for parents to build time into their schedules for kids to go outside and simply play, without structure, Mylan said.

“The key is that unstructured time to turn over the rock and discover, ‘Oh wow, cool, worms,’” she said.

Ages 3 to 6 are when kids are usually at their most curious, said Rebecca Meyer, an extension educator at the University of Minnesota Extension Center for Youth Development.

“We’re super curious when we’re young … there’s this great innate sense of wonder and curiosity,” she said. “And as we get older we have less curiosity or there are more things taking up our time that prevent us from having that same curiosity.”