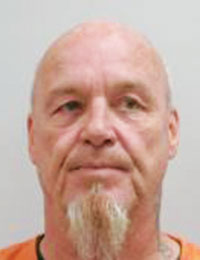 According to the court complaint, a Mower County deputy was dispatched to the Shell Gas Station on West Oakland Avenue at 2:29 p.m. on Wednesday regarding an assault. He made contact with the victim, who said that Thompson had threatened to kill her and assaulted her with a knife.

She told the deputy Thompson “just got angry” and assaulted her in her pickup truck while they were west of Austin. She said he was driving when they left their residence. He told her they were going to West Oakland Avenue, but then turned onto a gravel road. While in the country, she alleged that Thompson “jabbed” her with something. She said she got scared and wanted to exit the vehicle, but Thompson told her, “No you’re dead.” She also said he hit her in the ribs several times and threatened to kill members of her family. After the assaults, Thompson drove her back to their residence and she drove to the gas station and called the police. While at the gas station, she observed Thompson riding his bicycle south on County Road 21. She believed he was going to a residence in the 300 block of 12th Avenue Southwest.

While speaking to the deputy, Thompson called the victim’s cell phone. The deputy answered and arranged to meet with Thompson at East Side Lake, but Thompson did not show up.

Law enforcement went to the residence in the 300 block of 12th Avenue Southwest to locate Thompson. A woman answered the door and denied Thompson was there, but a detective saw Thompson’s bicycle through the window. When informed that officers would get a search warrant for the residence, the woman went back inside and convinced Thompson to come to the door. Thompson was arrested without incident.

While at the Mower County Jail, Thompson denied being around the victim, saying he was at the 12th Avenue Southwest residence all day. He indicated the victim was not truthful because she was angry he was having an affair with the other woman.

A review of Thompson’s criminal record shows multiple prior convictions for assault and terroristic threats. He is currently on probation for felony violating a domestic assault order for protection.

Thompson will appear in court again on June 27.

Chris Eastman of Riceville, Iowa, (left) and Chad Brigham of Adams were the winners of the first Schmitz Electric Smoke-Off... read more