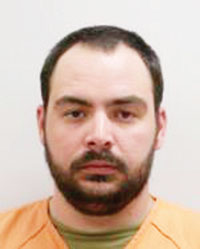 He was also charged with fifth-degree assault-inflict or attempt bodily harm and possess metal knuckles, both misdemeanors.

According to the court report, a man called dispatch on Wednesday and reported that Sheldon has assaulted him. He said the assault occurred at around 4:30-5 a.m. on Wednesday at a residence in the 1000 block of 11th Avenue Southwest, where Sheldon was “hanging out” and having a few drinks.

The victim stated he and Sheldon argued, at which point Sheldon attacked him with metal knuckles, causing head injuries that required six staples to close. He also reported being unconscious for about 15 minutes after the attack.

The victim came to the Law Enforcement Center and met with an officer, who photographed injuries to his head and upper body. The victim said he had a concussion and had been treated at the hospital in Albert Lea. He also said Sheldon had admitted the assault to a relative.

The officer made phone contact with the relative, who said Sheldon told her the victim was being “mouthy” and they fought. She also indicated she had spoken to a witness who told her that Sheldon had knocked the victim unconscious with metal knuckles. When she confronted Sheldon about the weapon, he admitted to having metal knuckles during the altercation, but denied striking the victim with them, saying the victim hit his head on a countertop.

Officers then went to Sheldon’s residence to interview him about the incident. Sheldon claimed the victim attacked him and that he defended himself. He said the victim injured his head on a bookshelf in the kitchen. He denied having metal knuckles as well as using any during the fight. He also told police he had consumed about 18 beers and a few mixed drinks on the night of the assault.

Sheldon will appear in court again on June 10.

Eh Doh Par, 23, of Austin was charged with felony first-degree criminal sexual conduct-penetration of child under 16 years of... read more