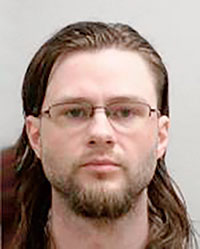 According to the court complaint, police responded to a call regarding an assault at 8:13 a.m. on Monday in the 200 block of South Main Street.

An officer spoke with an adult male who reported that Novak, a relative, had assaulted him with two knives. He said he had come by the residence earlier to check on Novak, who was “having a rough time” and had recently threatened to assault people and kill himself.

The man said he entered the residence and called for Novak to unlock the basement door, at which point Novak rushed up the stairs with two knives and said, “You’re gonna be sorry that you’re here.”

The man told police Novak began swinging the knives and that Novak grazed his lower back and groin area, though the officer did not see any cuts on the man or his clothing. The man then called police.

A police sergeant made verbal contact with Novak, who initially refused to open the door, saying the man “broke into” his residence and threatened him. Novak said he pushed the man and told him to leave. When the sergeant inquired about a weapon, Novak said he had possessed a weapon and the man was “lucky I didn’t do more with them.”

Novak eventually opened the door and was placed under arrest. Police found two large knives on Novak’s bed in the basement.

A review of Novak’s criminal record shows a prior conviction for assault of a vulnerable adult.

Novak will appear in court again on June 24.