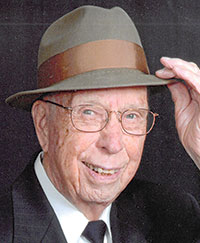 Leonard Norman Haugland was born on Christmas Eve 1915, the youngest son of mother Tone Olena Olson Haugland and father Nils Haugland, on the Olson-Haugland homestead in Nevada Township, a few miles east of Lyle, Minnesota, on State Line Road. His wife of over 50 years, Geneva Aaby Haugland; his two older brothers, Rudolph and Melvin, both of Lyle; and his oldest child, Gene, preceded him in death.

Growing up on the family farm, Leonard learned to drive at an early age, and automobiles remained a lifelong passion and hobby. From the Ford Model T his mother allowed him to drive to parties on neighboring farms to owning one of the first Prius hybrids in Southern Minnesota, Leonard loved cars and prided himself on knowing the latest models and automobile technology.

Leonard attended the one-room school near the family farm and spent his early years learning farming from his brothers and neighbors.  On the eve of World War II, he was working at Hormel when he met Geneva Aaby of Austin at the Terp Ballroom, where they and their friends enjoyed weekend dances. They married in January 1941 and had three children: Gene (deceased), Elaine Fountain of Kennedale, Texas, and David of West Hollywood, California.

During the war, Leonard served in the Civilian Conservation Corps in Alaska alongside his father-in-law, Oscar Aaby, and his brother-in-law, Hartvick Aaby. Returning to Austin, he worked at the Nash auto dealership before opening his own appliance business in Lyle. The family moved to Lyle in the early 1950s and lived there for a decade before returning to Austin. Leonard retired from Holiday Dodge in 1980.

In retirement, Leonard and Geneva enjoyed time with friends and family, renovated houses and traveled. They made many visits to Norway, Colorado, Texas, and the Pacific Northwest prior to Geneva’s passing in 2001. Just a month after 9/11, Leonard traveled to Norway for a family reunion at Rjukan, where cousins Knut and Ottar Haugland had been active in the Norwegian resistance during the German occupation.

In 2003, Leonard joined family, friends and neighbors to celebrate the 150th anniversary of the Olson-Haugland-Anderson farm, now owned by his niece, Lorna Haugland Anderson, and her family. In fall 2015, he drove his restored 1930 Ford Model A from his home to St. Olaf Church to celebrate his 100th birthday with over 300 guests.  As a Mower County centenarian, he was interviewed by the Minnesota Historical Society Oral History Project.

Leonard was active in community activities in Austin and Lyle throughout his life. He was a founding member of the Lions Club, served as an officer, and frequently represented the club at state and national conventions. On a Lions trip to Acapulco, Mexico, in the mid-1950s, he went deep sea fishing for the first time and caught a swordfish, which did not return to Minnesota.

Leonard was especially proud of his participation in the Lions International eye bank and eyeglass recycling program for children. He was recognized for his service and leadership with numerous awards. His collection of hundreds of Lions Club pins from around the world is on display at the Austin Senior Center. For decades, he was active in the Austin chapter of Sons of Norway, enjoying the companionship and cuisine of friends who shared a common heritage. As a longtime member of the Model A Club, he frequently drove his restored 1930 Model A coupe in Fourth of July parades and classic car events.

A member of St. Olaf Church for over 50 years, Leonard continued to serve as an usher at Sunday services until age 100. Blessed with good health throughout his life, Leonard fully enjoyed community and church events as well as coffee and meals with friends at local cafes until his final day.

Leonard is survived and remembered by his children, Elaine and David; his longtime companion, Jean Quednow; and loving nieces, nephews, grandnieces, grandnephews, family and friends locally, across the country, and in Norway.

Funeral services will be held at 11 a.m. on Saturday, June 8, 2019, at Six Mile Grove Lutheran Church in Lyle with Pastor Scott Meyer officiating. Visitation will be held for one hour prior to the service on Saturday at the church. Interment will be in Six Mile Grove Lutheran Cemetery in Lyle. We invite you to remember and celebrate Leonard’s life with memorials in lieu of flowers to the Lions Club eye bank and eyeglass program, Sons of Norway, Six Mile Grove Church, and St. Olaf Church. Services are prearranged and performed by Worlein Funeral Home of Austin. Condolences may be expressed to the family online at www.worlein.com.