She was to become the generation’s next Mrs. Hormel and her name was Germaine. She brought her sophistication and charm to Austin in 1922, as the 25-year-old bride of Austin’s seemingly most eligible bachelor. Jay was 29 at this point and was likely seen as a pretty good catch. 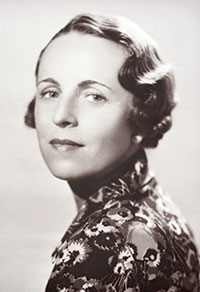 Jay met Germaine in France in 1918 while serving during World War I. It would seem that Germaine’s elegance and style captured Jay’s heart almost immediately, but the couple didn’t marry until four years later. The Austin Daily Herald reported that the marriage: “a surprise to all but the members of the groom’s family.”

Many in Austin remember first hand, or through family stories, how gracious and genuine Germaine was. She opened her home to children in need during World War II, and she provided love and support to her husband and three sons. She was a generous gift giver and the Hormel Historic Home has a few items originally belonging to her on display. One of her desks, given to us by Peggy Keener, sits at the front entrance of the home, and we have one of her lace collars in the historic sitting room.

One of the women that Germaine made a lasting impact on in Austin was Nelly Croes who recently passed away. Nelly married Victor Croes, the personal chef and friend of Jay and Germaine, in 1947.  Germaine, herself a French bride in rural Minnesota, took Nelly under her wing and the two developed a sister-like bond. Nelly also worked at the Hormel Company but was more than just an employee to Germaine. The ladies shared a heritage and a kinship that blessed them both following World War II.

I had the pleasure of visiting with Nelly on several occasions and found her French-ness somewhat exotic. In her thick accent she told the story of being invited to an elegant party by Germaine during a visit to California. Nelly said she would have nothing to wear so Germaine gave her a lovely dress that Nelly eventually loaned to the HHH. The dress is on display in the historic room that was once Jay and Germaine’s bedroom (1922-1925).

Lillian Hormel made the Hormel Historic Home a legacy in the community, but her daughter-in-law also left her mark on the Home. The only interior photos we have of the period when the family lived here showcase Germaine in a variety of rooms and poses. Her style is obvious. Both her physical beauty and the beauty of the house are evident. Happy birthday to Germaine, and thanks to all who have shared items or memories of this classy lady.

A standing tradition at the HHH. Led by Brian Koser, the band will feature a lively set. They will be joined by Adam Meckler on trumpet. Free

Music @ the Mansion: Kate & the Kavemen

The Wide Angle: Taking on things that are probably beyond me

The other day, I stopped into the Austin ArtWorks Center and spent some time talking with Kelsey Ritchie and Belita... read more