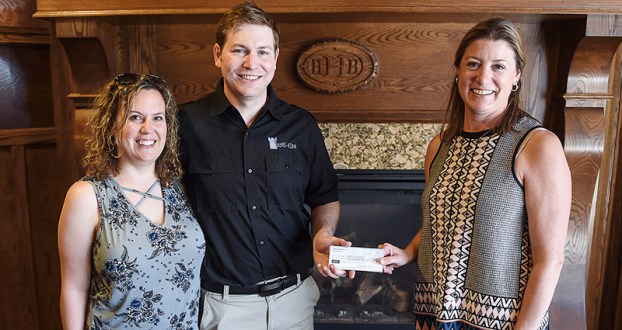 Gaming for a Cause: Austi-Con donates just under $3K from this year’s event

Helping a good cause through a good game — that’s the aim of Michael and Kate Jordahl’s annual Austi-Con tabletop game convention.

On Thursday, the couple donated a check for $2,974.26 to Hormel Historic Home Executive Director Holly Johnson, the proceeds from this year’s May event going toward the home’s autism programming. In just its fourth year, Austi-Con has raised a total of over $10,000.

“Our goal for the charity was to go over the $10,000 mark and increase attendance, which we did,” Kate said. “So we’re happy with that.”

This year’s total was slightly down from last year’s amount of just over $3,500, but the Jordahls chalk that up to not having as many high-end items up for bid in their auction.

A part of that total is $700 donated by the Rochester group Weird Cards, which holds “Magic: The Gathering” events for charity. The group has donated $700 each year of Austi-Con.

It was another weekend of table-top gaming at the National Guard Armory during Austi-Con in early May. Herald file photo

For Johnson, the donation of these funds from events like Austi-Con means the HHH can continue it’s summer autism programming, which now numbers three camps.

“This is the 10th year of camps,” Johnson said. “It means we’re providing something for many kids that wouldn’t have an opportunity for summer camp.”

And it’s a need that keeps growing. Tthe camp for the youngest children already has a waiting list.

Being able to help by donating funds was an obvious choice for the Jordahls. Kate herself is involved in working with the camps.

“When we decided to do a convention, we were looking for something with some sort of charity aspect,” Michael said.

“This is something we know exactly where the money goes and it’s just such a positive thing,” Kate added.

The Jordahls are already planning next year’s event; however, the dates have yet to be decided upon.

Now that school is out, police are reminding kids and parents about curfews in effect throughout Austin. According to Austin... read more