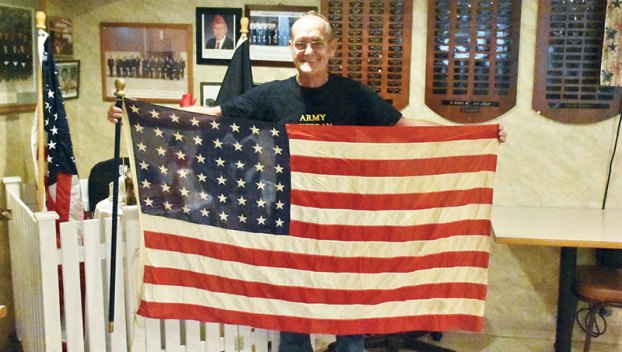 A 48-star flag was found during the Flag Day retirement ceremony on June 14 at the American Legion. Mike Stoll/mike.stoll@austindailyherald.com

On Flag Day, June 14, a piece of American history was saved from being lost forever.

The American Legion was holding its annual Flag Day retirement ceremony, where American flags are disposed of in a dignified manner. It was during that ceremony that Austin American Legion Post 91 Commander Roland Hanson discovered a different kind of flag.

“It was kind of folded into squares instead of the traditional three-cornered fold,” he recalled. “I picked it up and the first thing I spotted was there were six stars down and eight stars across. I held it up and asked the Boy Scouts and Girls Scouts, ‘What do you think is wrong with this flag?’ They said, ‘It looks like it’s in pretty good shape. Why should we burn it?’ I said, ‘You don’t know it, but this is a 48-star flag.’” 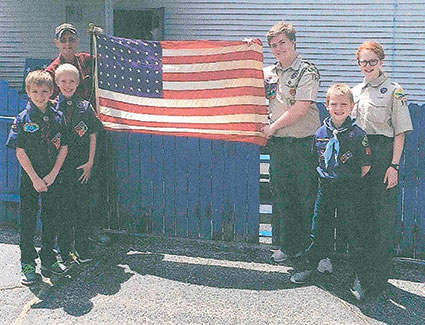 An American flag with 48 stars is displayed during a flag burning ceremony at Austin Legion Post 91. Photo provided

Hanson, a Vietnam War veteran, expressed a great deal of pride in his find.

“I remember going to school and pledging allegiance to these 48 stars,” he said.

While the individual or individuals who dropped off the flag may not have realized its significance, Hanson is grateful for their decision.

“They disposed of it the correct way,” he said. “We have two bins, one at the American Legion and one at the VFW, so we can dispose of our flags with dignity instead of finding them in a garbage heap or in a road ditch.”

Hanson said he plans to donate the flag to the Mower County Historical Society. He is also hoping to find a bottom part to the flag staff, possibly from a local school.

“(The flag) is the kind that they used to put up by the chalkboard,” he said. “It has the original ball on the top, which is called a truck.”

Hanson said his decision to donate the flag to the MCHS is predicated on a belief they could take the best care of it.

“Our boys and girls in World War I, World War II and Korea fought for these stars,” he said. “That’s why I think it deserves a special place.”