For the second straight season, a former Austin Bruins goaltender was selected at the NHL Entry Draft with Mads Sogaard being chosen by the Ottawa Senators in the second round. 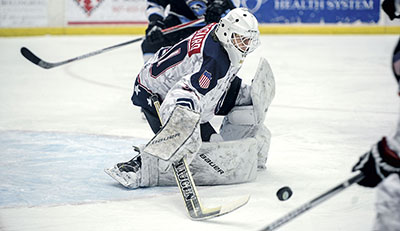 “I was told about Mads [Sogaard] from a former coach of mine, Mark Peterson,” said Bruins Head Coach and General Manager Steve Howard. “Mads was still in Demark at the time and trusting the word of my friend and former coach, we signed him sight-unseen. He’s a special player and was everything I was told he would be. He’s big, athletic, and can stop a puck.”

Following his season in the NAHL, Sogaard moved to Canada where he competed for the Medicine Hat Tigers of the Western Hockey League in 2018-19. Sogaard continued his rise on the NHL’s Central Scouting Report after putting up a record of 19-8-2-2  with a goals-against average of 2.64 and a .921 save percentage.

Sogaard was the third pick for the Senators in this year’s draft and their second of the second round.

Sogaard becomes the second Bruins goaltender to be drafted into the NHL in consecutive years for the Austin Bruins. Jake Kucharski was picked in the seventh round of last season’s draft by the Carolina Hurricanes.

Season tickets for the Austin Bruins are available now . To get your tickets, call the Bruins front office at 507-434-4978.

By Kevin D. Nelson Austin Parks and Recreation How about getting on the water? The Jay C. Hormel Nature Center... read more