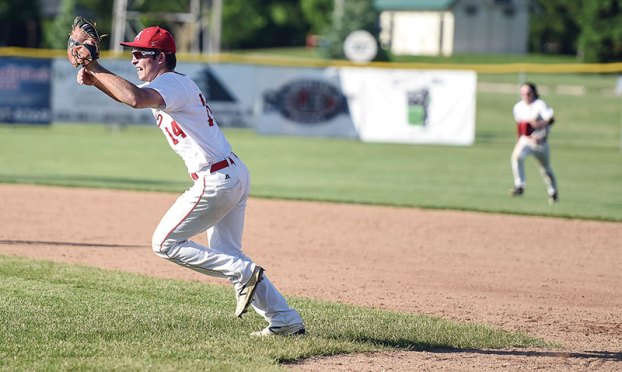 Austin AJ Mueller celebrates after catching the final out at first base in the Section 1AAA title game against Albert Lea Wednesday night at Marcusen Park. Eric Johnson/photodesk@austindailyherald.com

Ever since the Austin baseball team came up one win short of the state tournament last season, Hunter Guyette has been thinking about getting another chance at a Section 1AAA championship.

Guyette and the Packers made their dreams come true when they beat Albert Lea 7-3 in the Section 1AAA title game at Marcusen Park Wednesday. Guyette had a little extra reason to celebrate.

Guyette’s uncle Stephen Aberg passed away a year ago and one of the last things Guyette said to Aberg was that he was dedicating this season to his him. Guyette not only pitched two scoreless innings on Wednesday, he also bashed a two-run homer to left field to put things away in the sixth inning. 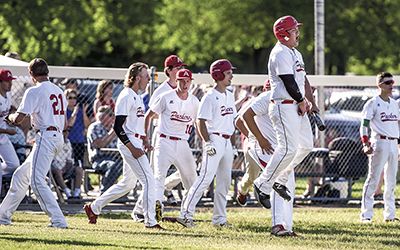 “Coming into this game, I knew (my uncle) was going to be with me and I knew he was with me the entire time (this season),” said Guyette, who finished with three RBIs. “I knew he was on top of my shoulders right there. It makes me emotional.”

Guyette wasn’t the only one feeling emotions on Wednesday. The entire Austin baseball team had a strong sense of redemption after the Packers had come up one win short of the state tournament last season. The Packers beat two teams — AL and Red Wing — that beat them in the Section 1AAA Tournament last season and now they’ll be playing in Austin’s first state tournament since 1990.

“It means everything to this senior class, Austin senior AJ Mueller said. “We had to deal with blowing a huge lead to Red Wing in the section final last year. This one’s for the class of 2018 honestly, because we finished the mission that they couldn’t do.” 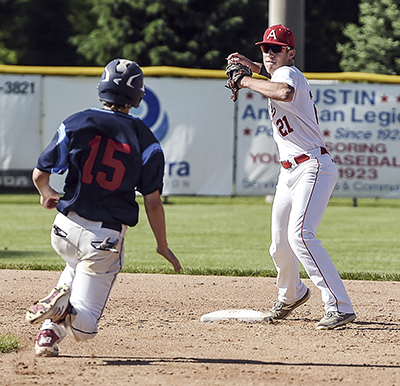 Austin’s Teyghan Hovland relays the throw after getting the front end of a double play against Albert Lea Wednesday night in the Section 1AAA championship at Marcusen Park. Eric Johnson/photodesk@austindailyherald.com

The Tigers (10-14 overall) made a push as they loaded the bases with no outs in the fifth inning. Koby Hendrickson singled in a pair of runs with two outs, but Guyette, who was pitching in relief, forced a ground out to escape the jam. The Tigers did score three unearned runs in the frame, but they left the bases loaded in the fifth.

Austin was playing in front of a packed house and the team had to shake off some nerves with so much on the line. Austin committed three errors in the win, but it was able to overcome those setbacks.

“I had a lot of nerves,” Mueller said. “It’s really different playing in front of 400 people instead of 40. We really fed off the energy and the momentum shift could’ve changed at any time during the game. We kind of fed off that energy that we got from the crowd.”

The Packers (14-8 overall) didn’t waste any time getting started as they smashed three extra base hits to score three runs in the first inning on Tuesday. Hunter Guyette drilled an RBI double down the left field line to make it 1-0 and Michael O’Connor and Teyghan Hovland each added a two-out RBI double to make it 3-0.

Austin head baseball coach Joe Kroc is a former Packer who once played with the Austin Greyhounds at Marcusen Park. He said it means a lot to get the program he once played for back to the state tournament. 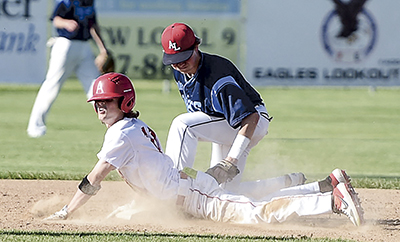 Austin’s Andew Schumacher looks up after sliding into second on a double against Albert Lea in the Section 1AAA championship Wednesday night at Marcusen Park. Eric Johnson/photodesk@austindailyherald.com

“When I first got hired, one of my personal goals was to put ourselves in a position to have a chance to go to the state tournament,” Kroc said. “I knew we had some good players coming through and last year we knocked on the door a little bit, but unfortunately we lost in the championship game.”

Hayfield baseball breaks in to the state Class A tournament

The Hayfield baseball team showed how mentally tough it has become when it bounced back from a four-run deficit to... read more