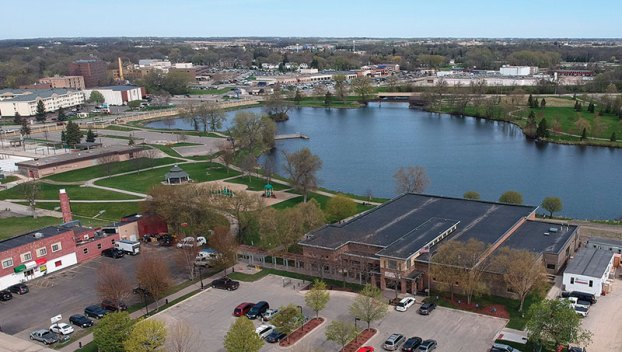 An aerial view of Mill Pond taken May 2019. Photo provided

CRWD to lead walk through Austin Mill Pond’s past

Austin Mill Pond’s major changes over the past 170 years will be covered Monday evening during a History Happy Hour walking tour around the historic stretch of the Cedar River.

Tim Ruzek, outreach coordinator for the Cedar River Watershed District, will lead the tour from 6-7:30 p.m., starting and ending at the Hormel Historic Home. A social hour will start at 5:30 p.m. with coffee, water and appetizers provided along with a cash bar available.

Ruzek will give a brief overview on the Austin Mill Pond area inside the Hormel Home’s Carriage Hall Event Center before heading out on the tour down Fourth Avenue Northeast to North Main Street and around Austin Mill Pond, a backwater stretch of the Cedar River State Water Trail. 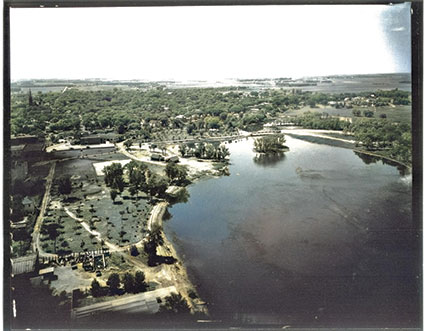 Colorized photo taken of the Mill Pond area in the 1920s. Photo provided

This tour will cover the extensive changes to the Cedar River and its adjacent land in the Austin Mill Pond, which first were significantly changed in the 1850s when the downtown dam was constructed on the river, creating a backwater “mill pond.”

For decades, this area was known as a “swamp land” and covered more land than Austin Mill Pond does today. By the early 1900s, the community started looking to create a park and water body shaped more like a lake, which led to the creation of Horace Austin State Park by the mid-1910s.

This state park, however, eventually faded away until the late 1950s and 1960s, when the Austin community began opening state park land for commercial development. With the construction of Interstate 90 through Austin – just upstream from Austin Mill Pond – more low-lying pasture land and wetlands in the area were acquired and opened for developing a commercial district, including Austin’s first indoor mall built on top of dredged river material.

An area long considered by locals to be “unbuildable” became highly developed and, thanks to numerous record floods in the past 20 years, is now protected by an extensive system of earthen flood berms and floodwalls. 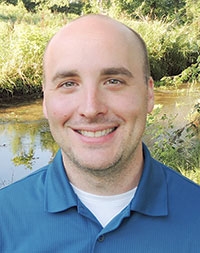 Ruzek will detail these keys phases of Austin’s history while walking to numerous sites related to it, including the site of the old Horace Austin State Park stone archway, the old state park swimming beach, and the site on North Main where the river used to make a sharp bend to flow into Austin Mill Pond. Near the new Community Recreation Center, he will discuss the history of Austin’s first park – Central Park – that was a long-time wooded escape along the river.

“Understanding the massive changes to the Austin Mill Pond area and why a flood-protection system became needed in that area will be helped when you’re on site and walking through areas that used to be part of the Cedar River,” Ruzek said, adding that handouts will be given on the tour showing historic photos and aerials that relate to various stops on the walk.

Those interested in walking a shorter distance can park and meet the tour in the city lot next to Brick Furniture along North Main Street, which is the first stop.

In case of inclement weather, the history tour will be postponed until Tuesday, June 11.