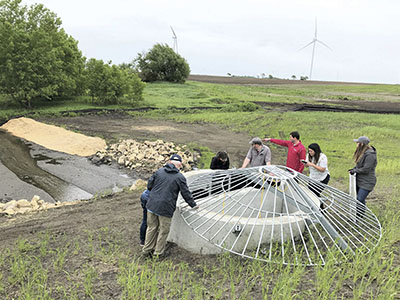 CRWD project manager Cody Fox, in red, explains during a June 11 field tour how the upstream berm of the Dobbins 1 project works when stormwater is flowing through the structure, reducing flooding and improving water quality. Photo provided

Nearly $2 million in projects are planned for construction this summer to slow and treat stormwater from more than 1,200 acres of mostly farmland in the Dobbins Creek headwaters of Mower County.

On Wednesday night, the CRWD Board of Managers approved bids on three of the projects, totaling nearly $1.7 million, in Red Rock Township. Earlier this spring, the board approved a $364,000 project, Dexter 30, in Dexter Township.

With these projects, CRWD overall will have field structures in place to slow and treat stormwater flowing from more than 2,200 acres of mostly cropland in Dobbins (a subwatershed of the Cedar River) or about 8 percent of its overall land.

“It’s exciting to be moving forward with more projects that will make a difference in our watershed,” said CRWD project manager Cody Fox. “None of this would be happening without the partnerships that we continue to make with landowners, farmers and township officials.”

Reduced flooding and improved water quality are goals of the projects led by the CRWD. It’s part of the overall Capital Improvement Plan (CIP), a nearly $9 million, 25-project initiative started in 2016.

All located southeast of Brownsdale, the four projects will construct earthern berms in Dexter and Red Rock townships, north of Interstate 90.

The berms will capture and slowly release large amounts of stormwater, allowing much of the rainwater’s sediment — often containing excess nutrients, chemicals and bacteria — to settle out in each project’s basin.

Once released from the berms, the treated stormwater will flow into one of Dobbins Creek’s two branches before they converge at Austin’s Jay C. Hormel Nature Center and flow into East Side Lake and the Cedar River State Water Trail.

Projects heading to construction include:

Dexter 30 — Located in the headwaters of Dobbins Creek’s south branch, this project will slow and treat stormwater from 490 acres in Dexter Township. It also will protect 30 acres of mostly former cropland by putting the land under a permanent conservation easement with the watershed district, creating wildlife habitat.

250th Street — About 470 acres will drain to this project site on the north side of 250th Street (southeast of Brownsdale) in Red Rock Township. Stormwater will be slowed and treated on a tributary stream that connects nearby to Dobbins Creek’s north branch. Watershed modeling suggests that the frequency of stormwater overtopping 250th Street will be reduced immediately downstream of the project. 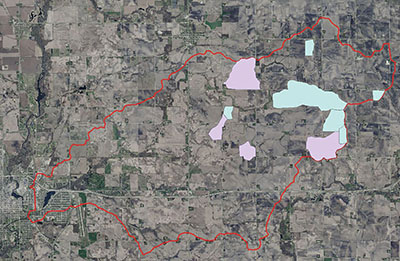 Dobbins Creek Watershed is outlined in red with the lower-left corner including Austin’s East Side Lake, which is created by a dam on Dobbins. Green areas show land sections in which stormwater is slowed and treated by CRWD Capital Improvement Plan (CIP) projects completed through 2018. Purple areas show land that will be treated through four CIP projects to be built in 2019.

Red Rock 26 and Red Rock 27 — These similar-sized projects in the South Dobbins’ headwaters of Red Rock Township will slow and treat stormwater from about 125 acres each or 250 acres combined.

CRWD is working to finalize two additional CIP structures for construction later this year also in the Dobbins watershed. Dobbins is targeted heavily by CRWD due to its propensity for flash flooding that causes water-quality issues and flood damage to rural and urban infrastructure and properties.

Upland water storage is a focus of the CIP initiative because it decreases the amount and speed of stormwater flow, which reduces the potential for significant streambank erosion downstream.

To date, CRWD has completed nine of 25 projects planned under its CIP initiative. The overall goal of CIP is to reduce flooding by 8 percent at the Cedar River-Dobbins Creek confluence in southeast Austin.

In 2018, CRWD built five CIP projects in the North Dobbins headwaters of Dexter Township, including Dobbins 1 — one of the largest CIP projects planned — that consists of two berms for treating stormwater from about 810 acres, west of Dexter.

At capacity, Dobbins 1’s storage will cover more land (over 50 acres) with stormwater than Austin’s 40-acre East Side Lake. Under the project, 80 acres of farmland also were enrolled in the federal Conservation Reserve Program (CRP), keeping the land from being farmed for a decade.

CIP projects are funded by a $3.2 million grant from The Hormel Foundation with nearly another $4 million thus far in funding from state grants and state bonding. Up to $1 million from a CRWD local project levy is available, if needed.

Capturing sediment with these CIP projects is an important strategy for water quality. Sediment is loose particles of sand, clay, silt and other substances mostly from eroding soils on land or streambanks that makes streams cloudy, which is harmful to fish and plant life while also filling in lakes and streams.

Most sediment is contaminated by pollutants, such as excess nutrients, chemicals and bacteria. One of those nutrients, phosphorus, can — when in excessive levels often from pastures and cropland — cause water pollution by promoting significant algae growth. Water quality can be harmed further when bacteria consume dead algae and use up dissolved oxygen, suffocating fish and other aquatic life.

To view an interactive story map and download photos related to completed CIP projects by CRWD, go online to:

Summer time means, among so many other things, fair time and king among those fairs is The Great Minnesota Get-Together,... read more