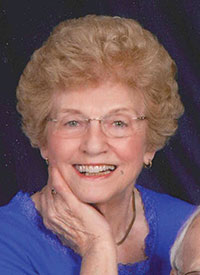 Constance “Connie” Baxter Olson was born Sept. 20, 1930, in Madison, Wisconsin, to Harvey and Loris (Baker) Baxter. Her parents divorced when she was nine months old, so she went to live with her adoptive parents, her aunt and uncle Dorothy and Howard Angell. The Angells had a dairy farm and Connie liked to live there. She belonged to 4-H and later to the Rural Youth group. She went to a one-room schoolhouse, the old Woodson School on South River Street. She graduated from Austin High School in 1948. She worked at the office of Geo. A. Hormel & Co. during her senior year in high school and then continued there for four years. She married S. Duane Olson on Sept. 11, 1949, and they celebrated 69 years together. For a decade, she worked for Josephine Kremer, director of elementary education of Austin Public Schools. She then worked at the Hormel Foods Corporate Office for 25 years. She retired in January 1992.

She loved her church, Westminster Presbyterian, and served as an elder, a deacon twice, and participated on the Fellowship Committee and Worship Committee. She also went to Mike’s Bible Study on Tuesday mornings and was active in Potpourri Circle. She was a Charter member of the Hormel Historic Home Y’s Women, belonged to South River Street Home Extension Project Club, Austin Medical Center Auxiliary and Keepsake Quilters. She liked to get together with friends for coffee and she liked to spend time at gatherings with her five classmates every month for the last 53 years. Family events were her most fun, especially picnics and grandchildren’s birthday parties, where she always had chocolate chip cookies for them. She enjoyed attending the grandchildren’s music concerts and sporting events. Her roses and gardening were one of her favorite past times. She considered books a “gift” and was an avid reader. She and Duane belonged to various square dance clubs in the area for many years and thoroughly enjoyed dancing. Sports were an essential part of her life and she could be found cheering for the Austin Packer football and basketball teams, the Minnesota Gophers football and basketball teams and the Minnesota Lynx. She and Duane loved to travel and did a lot of it in their retirement years, making journeys to Alaska, Hawaii, Bastogne, Belgium, Paris, Switzerland, Denmark, Norway, Sweden, Nova Scotia, Prince Edward Island, Canyonlands and other destinations in the U.S.  Camping trips were fun when the family was growing up. Trips were made to Fort Myers Beach several winters.

She was preceded in death by her parents; adoptive parents, Dorothy and Howard Angell; her brothers, Warner E. Baxter and Donald (Juanita) Angell; and a favorite aunt, Frances M. Baxter.

A memorial service will be held at 11 a.m. on Thursday, June 27, 2019, at Westminster Presbyterian Church with the Revs. Michael Olmsted and Brittany MacMillan officiating. Visitation will be one hour before the service on Thursday at the church. Interment will be in Oakwood Cemetery at a later date. Memorials are preferred to the Hormel Historic Home, the Hormel Institute or donor’s choice. Clasen-Jordan Mortuary is in charge of arrangements.