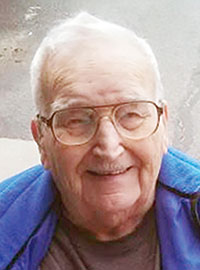 Clinton was born on Sept. 21, 1922, the son of Carl and Helga (Oyen) Peterson in Waltham, Minnesota. He served in the U.S. Army from 1942-45 and was united in marriage to Patricia Buckman on Oct. 26, 1947, in Dodge Center, Minnesota. Clinton was Foreman of the Rendering Division at Hormel in Austin, Minnesota, for 35 years. The couple resided in Austin, Wykoff, Minnesota, and Rochester, Minnesota. Clinton lived in Hayfield the past four years and was a member of the Hayfield American Legion. He enjoyed hunting, fishing and woodworking.

The funeral service will be at 1 p.m. on Saturday, June 22, 2019, at Czaplewski Family Funeral Home, 501 Second St. NW in Hayfield, with the Rev. Paul Hauschild officiating. Visitation will be from 11:30 a.m. until the time of service on Saturday at the funeral home. Interment will be in Fairview Cemetery with military honors by Hayfield American Legion Rothie Post 330. To share a special memory or condolence, please visit www.czaplewskifuneralhomes.com.