Austin graduate Ngor Deng has signed a national letter of intent to play basketball for the Bismarck State College Mystics of the Mon-Dak Athletic Conference. 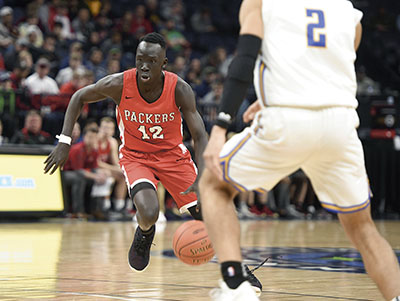 Austin’s Ngor Deng with the drive off the point in the first half against Waseca during the Minnesota Class AAA State Boys Basketball Tournament semifinals at Target Center. Herald file photo

Deng, a 6-foot, 1-inch guard for Austin this past season, averaged 10 points and six assists per game in his senior year. He helped lead the Packers to a 28-6 season record and a third place finish this year in the Minnesota State Class AAA Basketball Tournament.

The10AA Austin All Stars, sponsored by the Jays, Won their home tournament this past weekend by defeating Goodview 21-8 and... read more