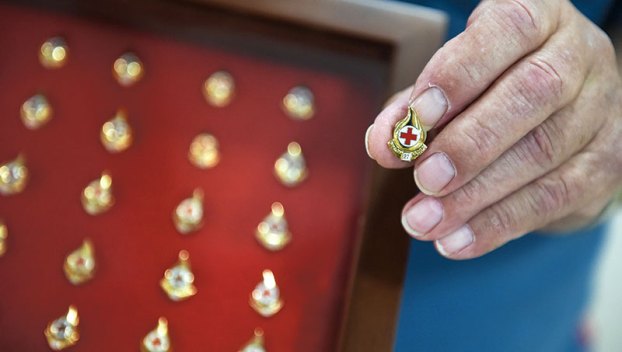 Robert Rice show off his most recent pin. In his lifetime he has given 27 gallons of blood. Eric Johnson/photodesk@austindailyherald.com

Robert Rice remembers the first time he gave blood in 1962.

His first wife had just given birth to their second child by Caesarean section. He stepped up and gave what would be the first donation of blood on the way towards a major milestone.

Rice was recognized Wednesday, by the American Red Cross for the completion of his 27th gallon of blood. 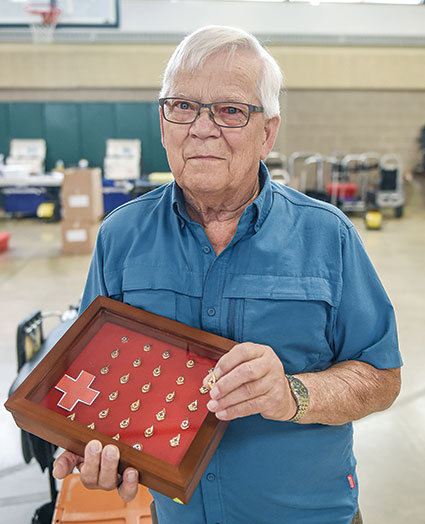 Robert Rice shows off his pins from the Red Cross. Each pin represents one gallon, totalling 27 gallons throughout his lifetime. Eric Johnson/photodesk@austindailyherald.com

“It’s very rare for somebody to reach the 27 gallon milestone,” said Red Cross Account Manager David Kelley. “It means a lot to us. People really understand the mission of the Red Cross.”

The year that Rice gave his first blood wasn’t an easy decision.

“I was trying for years, but I didn’t have the guts,” Rice joked.

From there Rice kept going and didn’t look back, understanding the need to help others.

“It’s the one thing I think I can do to help people,” Rice said. “It’s not big, but it makes me feel good.”

Rice is just one of the many generous givers in Mower County.

“Mower County is one of the best counties we have,” Kelley said. “We have a very loyal donor base here.”

Counties like Mower are especially important because of a recent shortage. Kelley estimated that currently, the Red Cross is sitting with a surplus of blood good for two to three days. Ideally, the organization likes that to have an inventory of five days worth of blood.

There are a few reasons for the current shortage. The amount of blood given is down roughly 20 percent due to high schools and colleges being out for the summer, combined with summer vacations that take up people’s time.

The winter didn’t do the Red Cross any favors either.

“It was a difficult winter,” Kelley said. “We had over 1,000 appointments cancelled and we’re still playing catch-up.”

It adds extra importance for people like Rice to continue giving and he has no plans to stop giving. Rice urges others to give.

“If you knew how much you helped people,” Rice urged.

Another end of the school year means another annual review of the Austin Positive Actions Coalition’s mission. During the course... read more