Austin man charged with threatening victim with knife; Allegedly angry over not being able to purchase marijuana 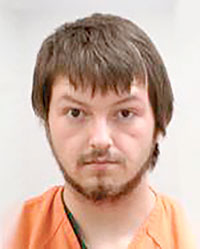 According to the court complaint, officers responded to a domestic assault report at 8:33 p.m. on Monday in the 1000 block of Eighth Avenue Southwest. Dispatch advised that the suspect, Rech, had a knife and was threatening the victim, a male relative. The reporting party, a female, was inside the residence on the second floor in a room with a broken door. When officers arrived at the residence, Rech went to a window on the second floor and began yelling at the officers, allowing the woman to exit the residence.

The victim and Rech then went downstairs while she called the police.

While speaking with the woman, officers heard the sound of a window opening in the back of the residence. They then observed Rech sitting on the second story windowsill. An officer spoke to him while other officers entered the residence and pulled Rech back inside.

Police then spoke to the victim, who said he had recorded part of the incident on his phone. During the recording, Rech was heard yelling and being belligerent towards the victim and the woman, saying, “I hope you die.” Rech could be heard on the recording saying “what you looking at” multiple times and telling the woman “get rid of him before I end him.” Rech then yelled, “You are a hypocrite, lying, heroin smoking (expletive) and I’m sick and tired of that dude. He’s weak, he’s dead (expletive) I killed him and I’m gonna kill you too.” Rech then asked the victim if he wanted to die. When the victim asked if he had a knife, Rech replied, “Yeah I do. Do you wanna die?” He then told the victim he was ready for him and that he would stab him.

The victim corroborated the woman’s story, saying Rech had a knife and threatened to kill him.

Officers located a knife in the living room. The victim verified it was the knife with which Rech threatened him.

A review of Rech’s criminal record shows a prior conviction for domestic assault.

Rech will appear in court again on July 1.

Driver taken to hospital after Friday accident; Cited for failure to yield

An Austin man was transported to the hospital with non-life threatening injuries after a two-vehicle accident Friday afternoon. According to... read more