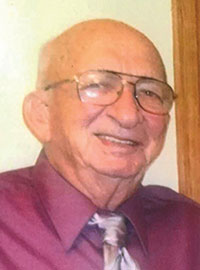 He was born on Oct. 28, 1931. “Bud” was a son to Harvey and Cora (Westrum) Lau, brother to Elaine “Toots” Gillard, Arcley Wahlers, Esther “Eder” (Laverne) Walheim, Sharron Berg and Robert (Mary) Lau, brother-in-law to Oscar and Carol Huff and David and Carolyn Bell and uncle and friend to MANY.

Bud grew up in the Glenville, Minnesota, area. After graduation, he enlisted in the U.S. Army and was stationed in Texas. Once he returned to Minnesota, he worked at various jobs, including Hormel Foods.  His last and most loved job was as a “foreman” for Kral farms.

Bud’s most important roles or titles were husband to Marjorie (his “honey”), dad to Doug Lau, Tim and Amy Lau, and papa to Aaron, Emilee, Jeremy, Ethan and Grace. He was also an “honorary” dad to Greg Kral and grandpa to Spencer Kral.

We will miss him dearly, but he is happy now, reunited with “Marge” in heaven.