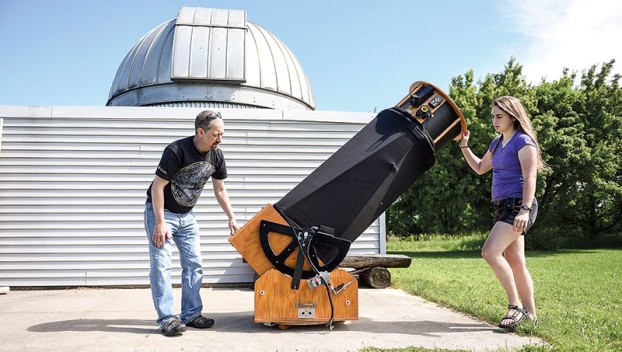 Standing in front of the Sola Fide Observatory, she summed up in a simple, quirky phrase what it’s been like upgrading the telescope at the observatory.

“The stars aligned,” she said with a smile.

Ken Fiscus, an Albert Lea Schools science teacher, wasn’t about to let her off the hook, however, ribbing her good naturedly about the use of the phrase.

However, Bahl’s use of the phrase seems apt. What could well have been a two year project instead turned into more of a two-month project.

In just a short amount of time, the nature center sold the existing 16-inch telescope that had been at Sola Fide for years and purchased a used 18-inch Starmaster telescope that is more mobile and much better quality.

The purchase of the telescope and the improvement to the observatory itself are part of an effort to bring the observatory up to date and get the public looking at the stars.

“We wanted to utilize more,” Bahl said. “Reach out more, to get people involved more. This is a great thing to have locally.” 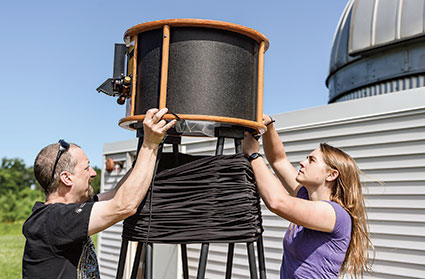 The new telescope is easily assembled and manueved and will allow spectacular viewing of the night skies.

The nature center brought Fiscus on board because of his science and astronomy backround, but before he donated his help he wanted to see just how serious the nature center was about going through with the upgrades.

So earlier this year he visited a star party at the observatory and saw first hand how much the place was still being used. About 30 people showed up and at a later start and it was estimated 70 were in attendance, some with telescopes of their own.

“They were serious about it,” Fiscus said. “If they hadn’t been, I don’t think I would have been involved.”

Fiscus drew up a list of things he would do if he had access to the nature center’s checkbook. The 18-inch Starmaster that was eventually purchased fit the bill nicely.

The new telescope can easily track the night sky, looking for target observations without the need of the separate computer the old telescope required.

And it’s easy to get up and running. Once the night sky constant Polaris becomes visible, then all that’s needed is another star, roughly 120 degrees opposite Polaris is needed. Such stars have included the red giant Arcturus, one of the easiest stars to find in the night sky. After that, it’s clean observation throughout the night.

“You can enter a target and it goes right to it,” Fiscus said.

This is only the beginning as more improvements to the site are expected, such as a concrete strip that would allow others to set up their own telescopes during a viewing night.

All of this work is to entice the public to utilize a facility that is somewhat rare in Minnesota.

“There are fewer than a dozen [observatories] in the state of Minnesota,” Fiscus said. “The closest is Cherry Grove.”

The simple hope is to further open access to a prime viewing spot of the universe surrounding us.

“A lot of people will never see a galaxy,” Bahl said. “To see something like that is really neat. It’s something people will be able to see.”