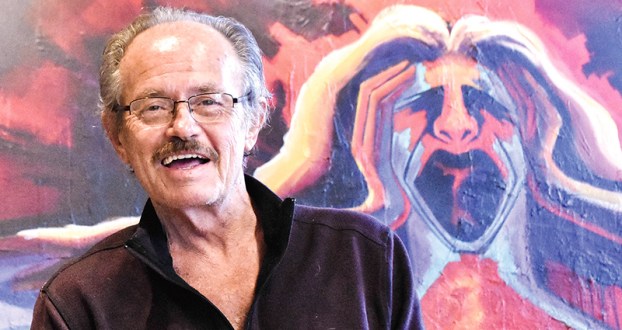 Mike Vevenka, 72, and an Austin native, returns to his hometown to exhibit more than 160 of his paintings that spanned during his multi-decade career as an artist. The kick-off is tonight, and the exhibit will be on display until Aug. 17. Photos by Hannah Yang/hannah.yang@austindailyherald.com

If there’s one message that Mike Veverka wants Austin to take away from his gallery exhibit, it’s just a reaction.

The Austin native returned to his roots and will host a major gallery opening of his artwork. The gallery starts today and will continue to be displayed until Aug. 17 at the Austin ArtWorks Center.

A public reception will be held from 5- 7 p.m. this evening and visitors can explore the 160 pieces of artwork that Vevenka created over the course of his career as an artist. 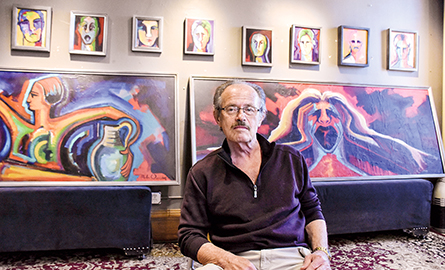 Mike Veverka, 72, originally of Austin, is opening his art gallery inside the Austin Artworks Center.

Some artwork one might find on their visit could be the various depictions of emotions, or simply the women’s artistic form, or there was a piece conceived from Vevenka’s anger and disgust toward the first conviction of a Catholic priest during the sexual abuse cases, portraying a menacing man wearing a priest’s collar and manipulating puppet strings connected to altar boys.

Veverka seemed prepared for whatever reaction the public may have toward his work, whether positive or negative, just as long as they felt something and were thinking. He’s not afraid to make the public “think.”

“It can be provocative,” he said. “I wanted to instill a thought process in the viewer and to provoke them to see what’s in front of them. The human form has always intrigued me and challenged me.”

Veverka was born on Aug. 3, 1947, in Austin and was a student at Whittier Elementary School—the school building no longer exists—where he was first inspired to become an artist by his teacher, Fred Whitmore. Another influencing figure was Jim Wagner, who was Veverka’s art teacher through his years at Ellis Middle School, Austin High School, and for two years at Austin Junior College.

Although Veverka was told to become an artist, he admitted that after he got married and had two children, he needed to find a more stable source of income. His love of art, however, motivated him to share his skills with young students and he ended up serving as an art teacher in the Rosemount Public Schools District for almost 30 years. He also served as an art instructor in Wykoff during the early 70s. 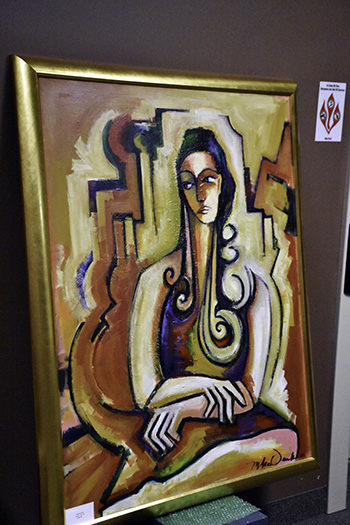 Mike Veverka, 72, considered this to be his masterpiece and personal favorite. This painting will be one of more than 160 paintings on display at the Austin Artworks Center this summer.

“It’s a natural transition,” he said. “I wake up in the morning, and art helps me find a sense of worth and that I was put on this earth for a reason. The reason for my existence. Art gives me purpose.”

Art has always been something that Veverka was drawn to, especially his theme of the human form. Drawing inspiration from influences of Pablo Picasso, Henri Matisse, Vincent Van Gough and more, Veverka has created artwork that reflects existentialism and abstracted perspective on emotional and intellectual expression.

Throughout the years, Veverka explored various mediums of art before settling into his primary and preferred mode of acrylic painting. He used to be reliant on realistic depictions of the human body and focusing on accuracy before feeling the desire to rely on his imagination to create a solid foundation of his compositions.

The results created a wide array of abstract and almost surrealist interpretation of the many complex shapes of which human bodies are comprised.

“I found the shapes and forms which exist in the human form to be very compelling and challenging to create within a composition,” Veverka added. 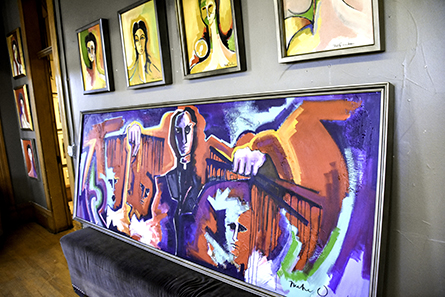 Mike Veverka’s work will be displayed at the Austin Artworks Center starting tonight and will be hanging in the gallery until Aug. 17.

For art, there’s no definitive timeline to expect a piece to be completed. Veverka merely indicated that he “keeps going” until he feels that a masterpiece is completed on his terms and conveys the message he wanted to get across.

His vibrant pieces have since held an impressive record of gallery openings throughout Minnesota, having shown in Mankato, Bloomington, Moorhead, Minneapolis and St. Paul. However, Austin has always held a special place in Veverka’s heart. His old classmates, friends and loved ones lived in town, and for the artist, returning home to share his love of art with those he cared for was the ultimate reward.

This love motivated Veverka, who has held a deeper sense of finding purpose in his art. He wanted to give back to the community, and witnessing how much his hometown has grown in its artistic culture was something that resonated deeply within him.

“Austin should be very proud of how the arts culture is growing here,” he said. “This place is very special.”

If you want to go

When: Opening reception Friday, June 14, from 5-7 p.m. and is open to the public, exhibit runs through Aug. 17

Gov. Tim Walz announced Wednesday that he has secured a Major Disaster Declaration that will provide federal funds to aid... read more