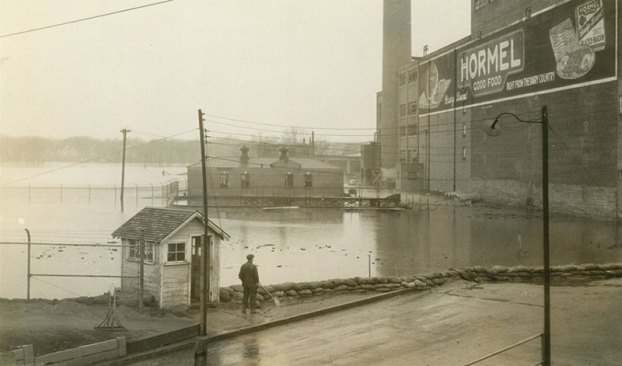 A part of history

On June 22, 1908, Austin experienced significant rainfall and significant flooding.  During the recent walking tour of the Mill Pond area, Tim Ruzek of the Cedar River Watershed District pointed out how that historic flood affected both businesses and residents in Austin.

The Cedar River and the surrounding land has now evolved into the economic and recreation area that many still enjoy today, but floods were a recurring theme in the area throughout history.

Down Pour of Water Adds to the Destruction of Other Elements—No End To Damage.

Hormel Packing Company Has $100,000 Worth of Meat Under Water—Austin Greenhouse Will Lose Thousands of Dollars—City Pumping Plant Under Water—Higher Water Looked For Until After Midnight Tonight—Thousands are Watching”

The Mower County Transcript from June 24, 1908, said the following:

“Early Monday morning of this week, the Cedar River commenced to rise on account of a cloud burst north and by nine o’clock was a raging torrent. At the Water street Bridge it poured over Campbell’s dam with increasing depth backing up into the basements of the Hormel Packing plant and the plant was shut down. At ten o’clock it backed into the machinery pit of the city power and pumping station and soon after all power in the city was cut off. At eleven o’clock the banks below Campbell’s dam were full up to the mill foundation and here is where the greatest damage was wrought.

The water swirled and flooded around and through Kinsman’s greenhouses, taking out the foundations and letting them down in wreckage. Soon after eleven o’clock the river was nearly up to the Bridge street bridge and cut out around the west abutment and in a few minutes the west end of bridge swung down stream and the bridge went out.  At noon, the water was level with the floor of the City pumping station and commenced to run across Water Street through the park and just west of Kinsman’s greenhouse. It continued to rise and at three o’clock in the afternoon, was running at a depth of two feet across Water Street at this point …”

“The water in the forenoon backed into Hirsh’s basement and Brown quickly moved out his barber shop. The water in the basement of the Herald office was up to the folder. The Great Western Bridge near the packing house was in danger of cutting out its abutments but a carload of sacks of cement from the Austin Tile factory was dumped in and the bridge was saved.”

The account of the 1908 devastation has been repeated in Austin’s history a few times, but thanks to recent flood mitigation, we hopefully won’t experience floods like the one in 1908 or the several since that time.

No charges will be filed in the Jan. 3 officer-involved shooting in Albert Lea that resulted in the death of... read more