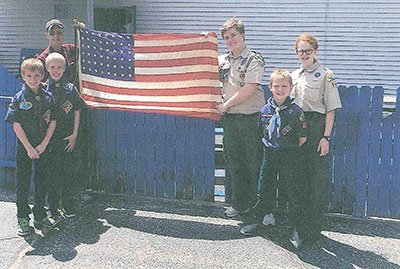 An American flag with 48 stars is displayed during a flag burning ceremony at Austin Legion Post 91. Photo provided

A little bit of history was found during the flag retirement ceremony at the American Legion Post 91 on Flag Day, June 14.

A flag with 48 stars was found by Commander Roland Hanson, which made for an impromptu history lesson on what was wrong with the flag.

The 48 star flag was the flag that was fought under during World War I, World War II and the Korean Conflict. Alaska joined the union on Jan. 3, 1959, which made the official flag 13 stripes and 49 stars. The little remembered flag became official on July 4, 1959, pursuant to the 1818 bill signed by President Monroe. It was a short-lived flag as Hawaii joined the union on Aug. 21, 1959, thus making the official 13 stripes and 50 stars on July 4, 1960.

The flag is held by Commander Roland Hanson and Scout Troop 109’s Noah Zimmerman. They were joined by members of Troop 113. Thank you to the Scout Troops who helped with the flag retirement.

We retire flags with dignity so we do not find the symbol of our country on the garbage heap. There are disposal bins at the American Legion Club rooms and the VFW building donated by the River Rats Car Club.