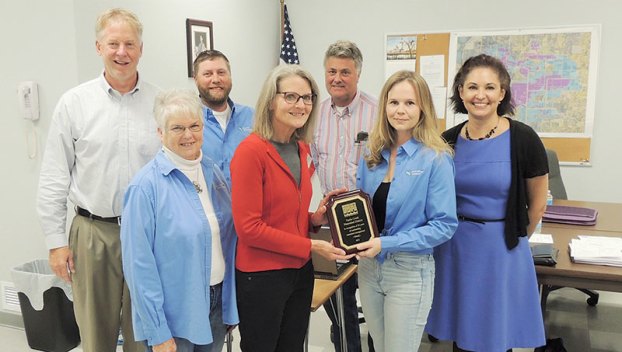 On Tuesday night, the Turtle Creek Watershed District board members and staff received a plaque from the Minnesota Association of Watershed Districts (MAWD) in recognition of 50 years of water management at their monthly meeting in Hollandale.

MAWD executive director Emily Javens and board president Ruth Schaefer congratulated the district on its milestone and water-management efforts.

“This is really huge,” Javens told the TCWD board while adding that the district’s local significance was on display when she saw a map of the watershed district even posted inside a Hollandale business before the meeting.

A century ago, work began on a five-year effort to build a drainage system for 15,000 acres of swampland in Freeborn County to open an abundance of peat soil for growing vegetables.

After the first vegetable crop was produced in1923 on the land around what’s now Hollandale, the Turtle Creek watershed area experienced many years of major vegetable crop production.

By the 1960s, though, the area started more frequently experiencing water problems partly due to the rise of row crop production of corn and soy beans and more land being drained into a system designed to handle less water. Flooding was causing heavy losses for vegetable crops, maintenance issues with rural roads and flooded basements in Austin. 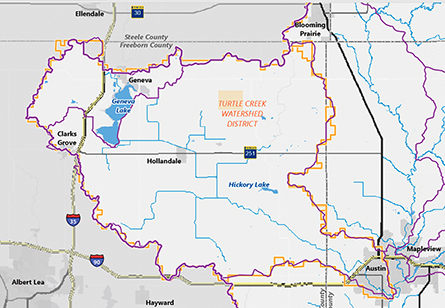 Turtle Creek watershed begins in northern Freeborn County at Geneva Lake, a shallow lake of 1,884 acres and a maximum depth of 3.5 feet. The area drains southeasterly to the City of Austin, where Turtle Creek transitions from a public ditch to a public waterway and flows into the Cedar River. At the time of European settlement in the 1850s, Turtle Creek was a small, winding creek that took the overflow water from Geneva and Rice lakes. Ditch construction starting in the early 1900s then started draining swampland.

To better manage the water, local and state officials in late 1968 formed the Turtle Creek Watershed District to oversee drainage on 157 square miles of mostly cultivated land in Freeborn County and part of western Mower County, including the City of Austin.

Today, TCWD remains focused on watershed management along with water quality, water-quantity management and education. With about 94 percent of the district’s nearly 100,500 acres in Freeborn County, the TCWD has four board members from Freeborn – chair Michelle Miller; Jeff Ravenhorst; Dave Vanderploeg; and Peter Van Erkel – and one from Mower County – Jon Erichson.

TCWD’s recording secretary Nancy Finley also was honored by MAWD leaders for 41 years of service and being the “backbone” of the district.

About a dozen people attended a pre-meeting gathering for the district’s 50th anniversary that included a presentation on the Hollandale area’s history of vegetable farming by long-time TCWD board member Peter Van Erkel, whose family started vegetable farming in 1924 in the area. He’s one of the few remaining vegetable farmers today.

It has been more than a month since the Austin softball team has been in the winner’s circle, but the... read more