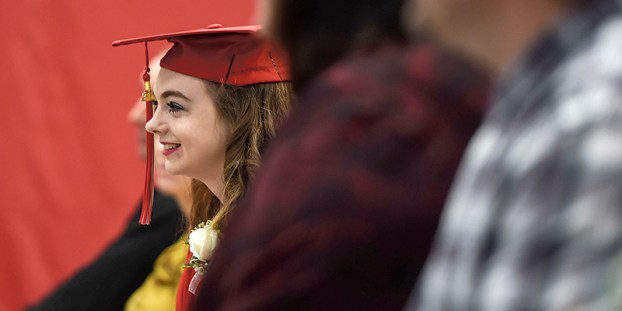 Nicole Anderson flashes a smile as she listens to Sydney Weisinger during Anderson’s graduation ceremony Friday morning at New Dominion School on the grounds of Gerard Academy. Eric Johnson/photodesk@austindailyherald.com 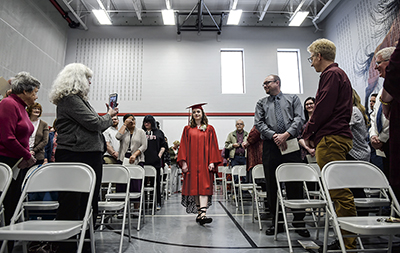 Nicole Anderson walks to her seat during the processional for her graduation at from New Dominion School at Gerard Academy Friday morning. Eric Johnson/photodesk@austindailyherald.com

When the first measures of “Pomp and Circumstance” started playing in the gymnasium, around 100 people stood up and faced the back while waiting for the class of 2019 enter through the doors on Friday morning.

Nicole Anderson, 18, slowly proceeded through the aisle and made her way to the front of the crowd as the single graduating student from New Dominion School of Gerard Academy.

With a single rose pinned onto her gown and a bright cheery red cap balanced on her head, Anderson smiled at all those who helped her reach graduation day. Standing in the crowd were teachers, therapists, family members and fellow Gerard residents who rooted for her every step of the way on her journey.

“We appreciate your support of Nicole,” said New Dominion School Principal Danielle Theis. “Enjoy this day, and remember to believe in yourself. Always remember that you have the greatest capacity to change your life.”

Among those who also spoke on behalf of Anderson were Sydney Weisinger, Samantha Reimers and Amy Horihan.

“Nicole is very bright and a motivated student who has a big heart that shines through,” Reimers said. “Let your courage guide you. Never stop learning.”

As Anderson took her place at the podium, she took a deep breath. While making her speech, her voice was calm and bold with no trace of fear.

“I’m a survivor of abuse, and yes, I struggle sometimes, but I refuse to let that define me,” Anderson said. “I am not a wounded victim. I want to be defined as a warrior.” 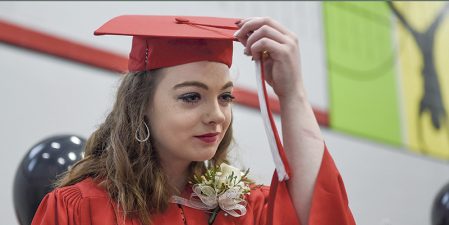 There were experiences that Anderson had gone through that no child should ever have to experience in the first place. She moved around constantly from nine different towns and attended 11 different schools in Minnesota. Having gone through abuse, Anderson had to defend and protect her siblings and reported the abuse to authorities at the age of 16. Her experiences eventually brought her to Gerard about a year and two months ago.

Unfortunately, Anderson’s story was one that many children at Gerard Academy have experienced in their past. Rather than being able to enjoy their childhood or go through typical adolescence like most, many have gone through abuse, emotional trauma, or neglect.

Many at Gerard don’t come and live there because they want to, but because it is a safe place where they can heal from their scars and find support from the staff who want to genuinely help them find a way to handle their emotions safely and find peace within themselves while giving hope for a brighter tomorrow. 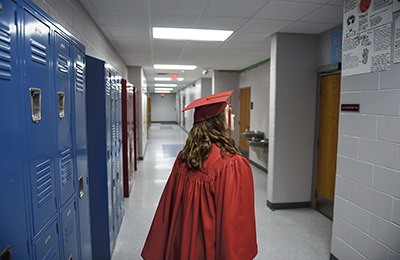 The day before graduation, Anderson took some time to reflect on her journey and dove into what she had gone through to make it to the end of her journey at New Dominion School, and eventually getting discharged from Gerard Academy down the road.

“When I first got here, I didn’t know anybody,” she said. “I’ve been given a lot of opportunities, and I want to take those opportunities. Everyone here has something to offer, and something to learn. Gerard is a very memorable place, and I don’t think I could ever forget my experiences here or in the years to come.”

During her time at Gerard, Anderson underwent a complete metamorphosis. No longer was she shy or afraid, rather more assertive and bold. Horihan, a therapist who worked closely with Anderson, recalled how the young woman was when she first arrived at Gerard: a shy, timid teenaged girl who didn’t know how to express her emotions, often saying things that she thought people “wanted to hear.” Now, she speaks her mind.

“She found her voice,” Horihan said. “Nicole has been a sweet, kind person, yet assertive. She won’t let people walk over her. She’s building on those things like forgiving herself, and letting things go, as well as self-compassion.”

Life progressed with Anderson being able to meet her developmental milestones. She learned about being courageous and grateful, as well as learning how to forgive herself and love herself. She also learned about being trustworthy and being able to build that trust with Gerard staff. Getting to this level required a lot of time, but it was a journey Anderson was grateful for.

Slowly, Anderson grew and became more sure of herself. She got a part-time job at the Pizza Ranch in town and attends Cornerstone Church regularly on Sundays and youth group on Wednesdays. She built her relationship with God and learned more about her faith. She’s been taking driver’s ed classes and earned her permit. She got to experience prom and danced the night away with her friends after getting fitted for the perfect dress and getting her hair and make-up done.

After commencement, Anderson work with her social worker in planning out the next steps of transition. She will be at Gerard Academy for a little while longer, but Anderson is hopeful for her future. She was thinking about reconnecting with her siblings and foster parents down the road, maybe finding her own apartment and even attending college.

Nicole Anderson speaks during her graduation ceremony Friday at New Dominion School on the grounds of Gerard Academy. Eric Johnson/photodesk@austindailyherald.com

Most residents’ average stay at Gerard Academy is about nine months, which meant that not many students would be around for graduation, according to Horihan. Whether they choose to either attend a commencement ceremony back in their own home school district or opt to graduate from New Dominion with a diploma from their home district is completely up to the student.

Anderson wanted to graduate from the place where she felt like “she truly belonged,” and felt that Gerard was where she found “her people.”

“They do everything they can to make Gerard be a welcoming place,” she said. “The biggest thing is belonging, and this place makes me feel like I belong. I never felt that before.”

So, that’s what Anderson did on Friday morning. She received her diploma from Austin High School and was able to move her tassel to the left, signaling the end of a chapter to her life’s story. Situated on the other side of the gymnasium at New Dominion was an open house.

Red gerber daisies decorated the tables with the school colors of red, black and white, and Anderson’s senior photos were projected onto the wall.

There was a makeshift display that Anderson created and cake for which she got to pick the flavors. Her bright eyes and smiles were contagious to those in the receiving line of hugs that came from the guests who came to wish her well.

If there was something that the teen learned during her time at Gerard, it was to not let her past dictate the direction of where she wants to be in the future.

When she closed her commencement speech, Anderson summed up her journey with a quote from Terri St. Cloud.

“She could never go back and make some of the details pretty,” she said with resilience. “All she could do was move forward and make the whole beautiful.” 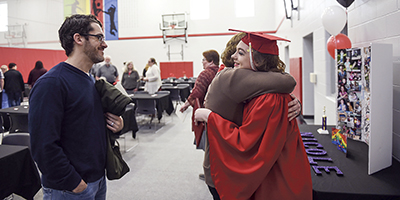