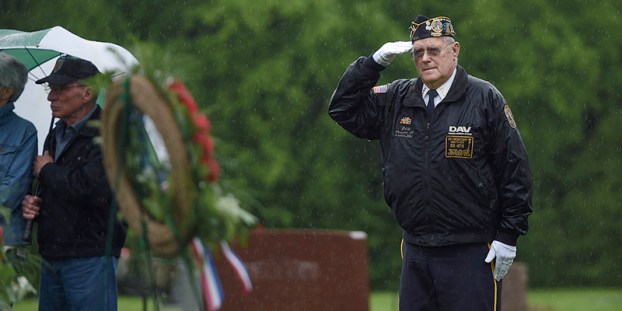 ‘These dead shall not have died in vain’: Local veterans hold Memorial Day ceremonies

Rain soaked the grounds of Oakwood Cemetery on Monday, a solemn reminder of those buried within its confines.

But the rain was not enough to stop local veterans’ organizations and several civilians from gathering at the cemetery Monday morning to pay their respects to the fallen veterans who now call Oakwood their final resting place. 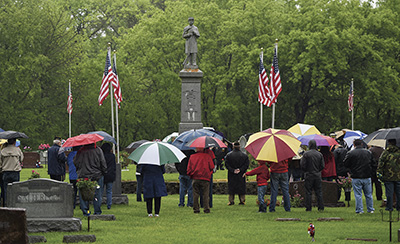 Despite the rain, several people attended the Memorial Day ceremony.

“Today we honor and remember those veterans that have died,” said VFW Post 1216 Adjutant Jim Hecimovich.

The ceremony was the first of several Memorial Day cemetery ceremonies held by members of VFW Post 1216, American Legion Post 91, Spam Post 570 and DAV Chapter 27. A tribute to those buried at sea was also held at the Horace State Park Bridge. 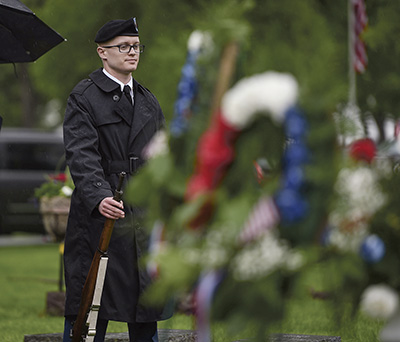 Throughout Mower County, other veterans’ organizations held similar ceremonies at other cemeteries.

The rain kept the ceremony brief. After a prayer and performance of the National Anthem, wreaths placed around Oakwood’s Civil War monument were dedicated by the various veterans’ organizations, as well as several civic, city and county organizations.

The ceremony was completed with a 21-gun salute from members of the VFW and American Legion Color Guard, followed by the playing of “Taps.” 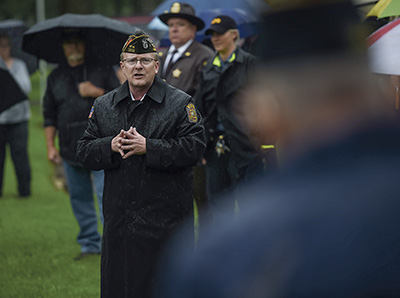 Jim Hecimovich talked about the importance of observing Memorial Day during a ceremony Monday at Oakwood Cemetery. Eric Johnson/photodesk@austindailyherald.com

“We pray, oh Heavenly Father, that you bestow your blessings upon them, that these dead shall not have died in vain,” said Fr. Jon Sullivan of Christ Episcopal Church.

No panic, no problem: Packers take down KoMets

There is no panic in these Packers. The top-seeded Austin baseball team shook off a nightmare start and wrangled control... read more