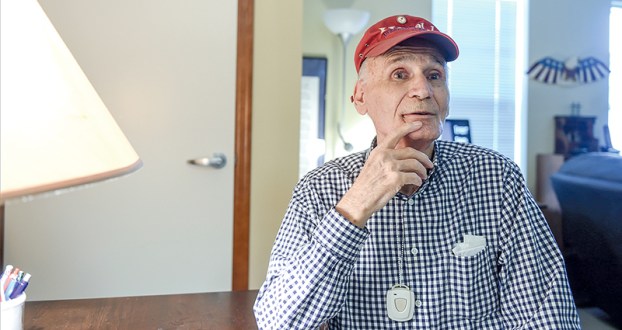 Former Austin Daily Herald reporter Lee Bonorden looks back at his years on the desk 10 years after he retired. Eric Johnson/photodesk@austindailyherald.com

Ten years ago today, one of the most recognizable faces in Austin and area journalism retired from his beat at the Austin Daily Herald.

Lee Bonorden spent much of his time traveling the county and working the phones at the Herald. Even when health issues began impacting his life and his work, Bonorden dove into the articles he wrote, happy to simply tell a good story.

Now, Bonorden looks back, past those years of retirement into the days of county roads and small towns.

“It was the gift of journalism,” Bonorden said, from his room at St. Mark’s Assisted Living. “(People) were letting me into their lives and tell their stories.”

Bonorden sat down Tuesday morning in his room at St. Marks. He was wearing an old Austin Daily Herald cap he kept from his working days and sat easily at his dining table.

In many ways he was the same Lee Bonorden that was always working some sort of contact Monday through Friday, always looking for a story to tell, often times on the roads, going from one community to another.

“I’m a small town guy at heart,” Bonorden said. “One of my greatest pleasures, when I could still drive, was going from point A to point B.”

Bonorden came to Austin on May 10, 1985, from Iowa after stops in Wisconsin, Wyoming and Missouri. When it came to journalism, he came from a background of doing and learning rather than learning then doing. 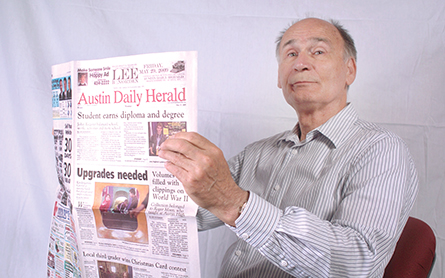 His only formal learning came from his time in the Navy where he was a reporter during the Vietnam War.

“It was learning by doing and publishers taking a chance on me,” Bonorden said. “The more I did something the better I became.”

During his time with the Herald, Bonorden covered everything there was to cover, quick to point out, “I don’t mean to brag.”

He was a journeyman of sorts when it came to subject matters, floating from stories in one beat or another. Some of the best stories came from the small towns he visited.

“Austin was the big city, but I admit that I was always thinking of the routine,” Bonorden remembered. “We published at noon and I would take off. I had a circuit through these small towns.”

During those early years, however, Bonorden would come to cover one of the most painful moments in history: the Hormel strike.

Bonorden remembered a town damaged as he set about telling the stories.

“That was the most interesting and exciting period of time,” he said. “The town was torn apart.”

Bonorden remembered attending church at Grace Lutheran Church and seeing the split within the pews. Several police officers watching the strike line mixed with several strikers from the P-9 Union.

“One side were the strikers and on the other, the cops,” Bonorden said. “Fathers against sons, mothers against daughters — it was like a huge divorce that tore people apart.”

In 2001, life changed for Bonorden. He suffered a heart attack and complications from diabetes that began stripping his site. However, Bonorden still came back and went straight to work until retiring in 2009, though he still had a presence writing his columns through 2014.

Even so, Bonorden used the time of retirement to continue writing his columns as a form of what he calls, “self therapy.”

During retirement, Bonorden has had time to reflect and look back at how things have changed in the intervening years of starting at the Herald to retiring.

It was with some sadness that he looked at crime in Austin, lamenting at one point, “The violence. There was no such thing as a drive-by shooting in 1985.”

He also looked at how the job of journalism has changed so rapidly in recent years.

“Journalism was changing and lifestyles with it,” Bonorden said.

During his time in Austin, Bonorden worked for the Herald even though he remembered the Post Bulletin, which had a satellite office in Austin for a number of years, offering him a higher jump in salary.

Bonorden turned it down, instead believing in the value of what he did while with the Herald.

Bonorden spent his years in journalism telling stories and part of that was the joy he got listening to the story.

What that ultimately indicated was he enjoyed being in the company of others.

With no qualified applicants for law enforcement, the city of Adams will receive its policing services through Mower County. The... read more