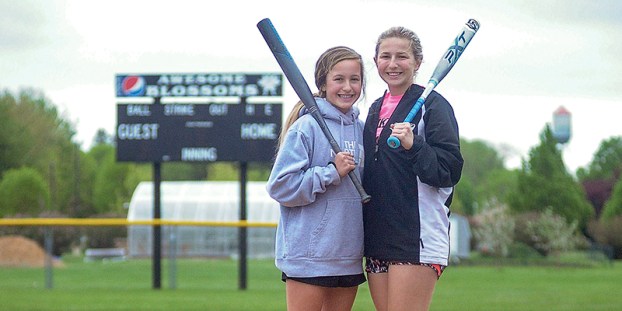 BLOOMING PRAIRIE — Macy Lembke has spent much of her life trying to keep up with her big sister Maya.

After years as a student manager for the Blooming Prairie softball team, Macy, a seventh-grader, has been playing second base for the Awesome Blossoms and Maya, a junior, has been a a steady force at catcher, a position she has held since she was an eighth-grader.

Macy had a memorable moment on Thursday when she singled and scored the go-ahead run against Hayfield in a Section 1A West second place game, keeping BP’s season alive.

The moment was big and the season has been a blast for Macy, who said it’s been a thrill to play with her big sister’s team. 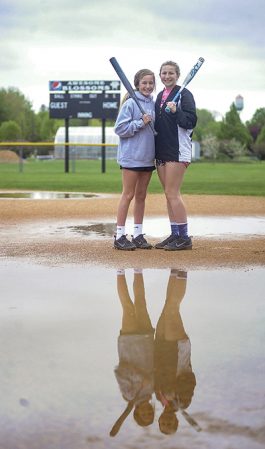 “I was at every practice (last year) and I always wanted to get into the games, even though I knew I wasn’t quite ready,” Macy said. “It’s super fun to play with them this year.”

Maya couldn’t help but feel a little nostalgic about playing with her only sibling after the win over Hayfield.

“I didn’t even realize how special it was until this last game,” Maya said. “Four years ago I was in eighth grade and we got second in subsections with (Macy) as the manager. This year she’s on the team and starting. It was real cool and real special.”

Maya and Macy both picked up their passion for softball from their parents and they’ve both dedicated themselves to the sport in BP, which has a strong softball tradition. Maya makes an impact with her focus behind the plate and she swings a strong bat in the heart of the order, while Macy serves as a lead-off slap hitter and she is a steady fielder.

“It’s been tough to catch up to how fast the game is after playing JV and junior high,” Macy said. “I played 12U last year. Maya gives me pointers all of the time. She tells me to keep my head up when I strikeout or make an error.”

When things get too fast for Macy, she always has Maya to lean on. Maya was once a middle schooler playing with high schoolers and she has plenty of advice for players in that situation.

“I know what it was like to be brought up as a younger girl,” Maya said. “It feels a lot better when the older girls take you under their wing and comfort you. The nerves go away then. I kind of did that for Macy.”

BP (10-11 overall) will play Wabasha-Kellogg (13-10 overall) in a Section 1A elimination game in Todd Park at 5 p.m. Tuesday. The Awesome Blossoms have won four out of their last five games after having suffered a six-game losing skid.