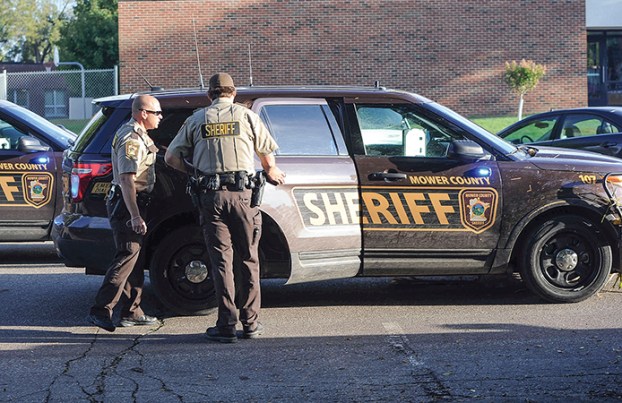 The Mower County Sheriff’s will be providing policing services for the City of Adams effective through Dec. 31, 2020. Herald file photo

With no qualified applicants for law enforcement, the city of Adams will receive its policing services through Mower County.

The Mower County Board voted unanimously to approve a police services contract for the City of Adams effective through Dec. 31, 2020. It also approved the update to the 2019 staffing levels for an additional deputy.

Sheriff Steve Sandvik approached county commissioners during Tuesday morning’s session in order to address some concerns he had regarding the amount of services that were being provided to the city of Adams by the county, despite Adams having its own police department.

Since Jan. 1, Mower County responded to 152 calls just within the City of Adams, while Adams responded to 53 total calls. Sandvik wanted to ensure the county was getting paid an equitable amount for the time and work spent responding to various calls in the town.

“We are extremely understaffed,” he said. “We want to be sure we’re getting an equitable share … many sheriffs throughout the state are utilizing contracts to more effectively cover the entire county and increase public safety.”

Currently, Adams has a job listing for a full-time police chief on the city’s website. However, the interim police chief retired, and there is a lack of qualified applicants. Sandvik stated that the interim chief advocated for the county to take over services and presented the proposal to the Adams City Council.

“That’s why entering into things it would be a benefit to us as a whole,” he said. “We entered this with some concerns for some small towns to maintain their own police departments. The chief resigned, there were no qualified applicants to take on that role. ..The way it was in Adams, their department had a retired interim chief who doesn’t want to be there, and advocated for this. He met with their council twice about hiring a chief and new personnel and approached us to consider a contract.”

This type of police services agreement is not uncommon for small towns in rural counties that don’t have their own police departments and cannot sustain their own because of low applicants for personnel and limited funding sources. They contract out for law enforcement services through the sheriff’s department, who then has deputies patrol designated areas within the county.

As of now, LeRoy is the only town in Mower County that contracts out its policing services directly through the Mower County Sheriff’s Office. According to the City of Grand Meadow website, Grand Meadow has one full-time police chief and seven part-time officers. Brownsdale and Lyle both have one officer each.

A challenge that comes with covering the county is the response time in case of an emergency. Towns that don’t have their own police department and need an immediate response depend on the deputy who is closest to the location, but that doesn’t guarantee they will be there right away if patrolling another part of Mower County.

With the approval of an additional deputy, Mower County may be able to help alleviate some of the workload.

“I don’t wanna talk badly about them, but there’s a real difference with a full-service police department,” Sandvik said. “It’s a 24/7 job. You don’t have an option to say if you’re not available to do what’s needed. That’s the difference. The more we can do to expand our footprint and work with our city partners to pick up that tab is, I think, an appropriate approach to consider.”

Among the hundreds of spellers competing in the 92nd annual Scripps National Spelling Bee, speller no. 268 is none other... read more