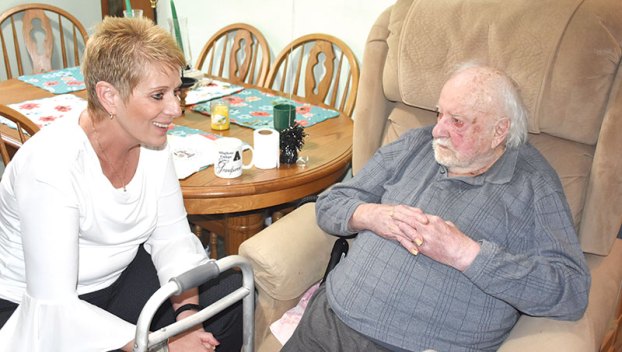 Ken Kelly of Austin may have recently turned 100, but he’ll tell you he still feels like he’s 60.

“My doctor tells me I have the blood pressure of a teenager,” he said matter-of-factly.

On Wednesday, the St. Paul Railroad Retirement Board recognized Kelly for celebrating his 100th birthday, which occurred on March 19.

“Any centenarian, whether it be a railroader or spouse of a railroader is recognized by us,” said St. Paul Railroad Retirement Board District Manager Liz Fairfax, who presented Kelly with his certificate of achievement. “It’s presented by our headquarters and signed by the three-member board that oversees the agency. (The board members) are presidentially appointed.”

Kelly was born in Iowa on March 19, 1919. His father was a railroad worker and, as a young boy, Kelly moved with his family to Jackson, Minnesota.

During World War II, Kelly joined the Army and was stationed in India. After the war, Kelly worked for the Chicago, Milwaukee, St. Paul and Pacific Railroad, a job that brought him to Austin.

“I worked on the railroad for 25 years, then I got sick,” he recalled. “The Lord came into my life and inspired me to be a writer, and that’s what I’ve been doing for 67 years.” 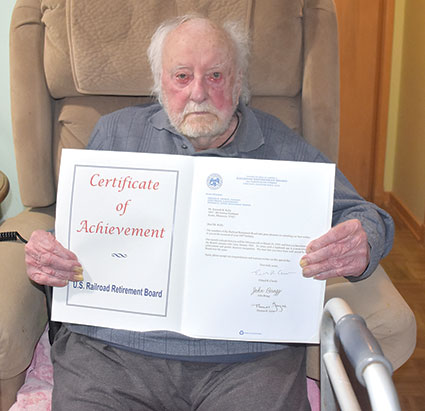 Ken Kelly received a certificate of achievement from the St. Paul Railroad Retirement Board in honor of his 100th birthday.
Michael Stoll/mike.stoll@austindailyherald.com

In that time, Kelly has written 47 stories, three novels and two children’s books. While time has made the process more difficult, Kelly has no intention to stop telling stories.

“I don’t write anymore because I can’t read my own writing, but I memorize it and I give it to (son) Ron (Kelly) and he writes it down,” he said. “Then (granddaughter) Angie (Kelly) comes over and types it up.”

One children’s book, “Dubbie and the Dragon,” will be published in a few months and will be available through Amazon and select bookstores.

“It’s about a little boy that meets up with a dragon and they become friends and go out on adventures,” he said.

Kelly has also been writing poetry, much of which focus on his favorite season: spring.

“I’m crazy about spring,” he said.

Fairfax said that the St. Paul Railroad Retirement Board recognizes an average of 24 to 30 centenarians in Minnesota per year.

“It’s a great achievement and I enjoy doing it because it gives me a chance to meet people and maybe pick up (life prolonging) secrets for myself from what they’re doing,” she said with a laugh.

“I want to see my great-great-grandchildren grow-up,” he said.

As law enforcement agencies discovered during the extra distracted driving enforcement campaign, too many Minnesotans are treating drive time as... read more