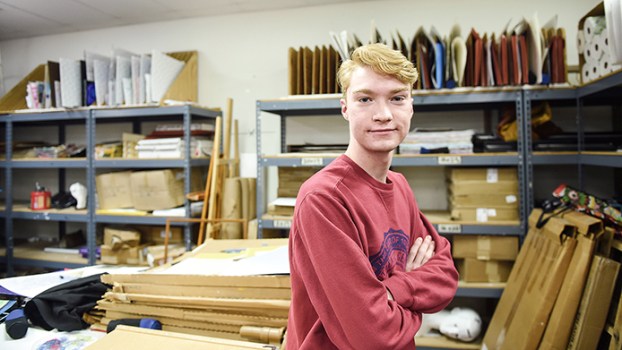 Austin High School student Tyler Quitmeyer has won the national Congressional Art Competition and he will have his artwork displayed at the U.S. Capitol building for a year. Eric Johnson/photodesk@austindailyherald.com

A long time ago, Tyler Quitmeyer’s family took a trip to Washington D.C. and visited the United States Capitol building. He remembered examining some of the country’s greatest artwork hanging there.

Never did he think in his wildest dreams that one of his own creations would be on display for lawmakers from all 50 states to see, until he received a phone call a week ago.

The Austin High School senior won the Congressional Art Competition and will have his artwork displayed at the U.S. Capitol for one year. He will also be given two round-trip airline tickets to attend the national reception in June, where other featured and submitted pieces of artwork from students around the country will be recognized.

“It still hasn’t hit me yet,” Quitmeyer said on Thursday morning. “It’s still something that I don’t even comprehend. It’s weird to be thinking of my artwork hanging anywhere in Austin, let alone at the Capitol. It’s crazy to think every congressman all over the country will see it.”

Quitmeyer won with a color pencil portrait titled “All American,” which depicts the portrait of a man wearing a denim jacket with pins representing each state in the United States. This comes almost more than a month after he won first-runner up in the Minnesota Junior Duck Stamp Competition.

“Congratulations to Tyler for his excellent piece of patriotic artwork that will hang in the U.S. Capitol,” Rep. Jim Hagedorn (MN-01) said in a statement. “I’m grateful to him and all students who submitted pieces for sharing their artistic talents. I wish Tyler and all students the very best in their future educational endeavors.” 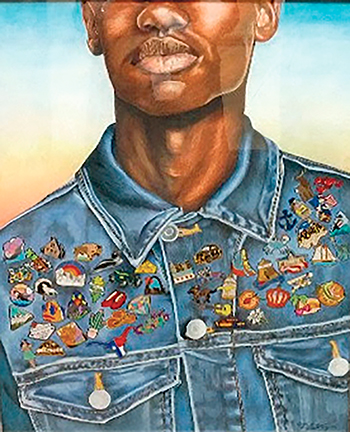 Tyler Quitmeyer’s piece titled “All American” won the Congressional Art Competition, and will be displayed for one year at the U.S. Capitol in Washington D.C. Photo provided

Those who worked with Quitmeyer personally weren’t surprised at all that he would perform especially well at that level of competition.

Jake Levisen, Quitmeyer’s art teacher, stated that while another student had won the Congressional Art Competition before, the artwork was displayed at the Rochester Government Center a couple years ago. Quitmeyer’s piece, on the other hand, won the honor of being displayed in the nation’s capital.

“Talent can only take you so far,” Levisen said. “During the last two years, I’ve enjoyed seeing that progress and Tyler is phenomenal, and his drive and just his constant love of challenges along with the time he’s been putting in got him to the level where he’s at today.”

Ironically, color pencil was a medium that Quitmeyer deplored at first. Levisen fondly recalled the first attempt at a flamingo piece that his student tried creating during his sophomore year. Yet, Quitmeyer pushed through the challenges and eventually, from Levisen’s perspective, nearly “mastered the medium.”

“It’s a very complex technique,” he said. “Tyler hated colored pencil when he first started. Now, he’s near forming a mastery of it. He built up different layers and textures and it takes a while to complete. It’s definitely a big change and sign of progress from when he first started a couple years ago.”

The process of creating the artwork took quite some time. First came the visual concept of the piece, which came to Quitmeyer last summer. He had an idea that eventually came to life. Using a technique learned from Levisen called “burnishing,” Quitmeyer was able to blend multiple layers until no paper showed in the last product, leaving a smooth, subtle finish that almost looks painted as opposed to drawn.

Quitmeyer gave a lot of thought and consideration to each aspect of the drawing. He shared that during family trips, he would collect pins as souvenirs of each place he went to visit. He decided to incorporate that piece of self-representation into the work through the iconic symbols that represented each state, such as Minnesota being represented with a loon, and Wisconsin with a block of cheese.

“I wanted to draw something that had a uniting factor,” Quitmeyer said. “Our country’s been ‘disunited’ in recent years. It was an idea I wanted to do since last summer, and this competition was a perfect opportunity to show that patriotic feeling.”

When Quitmeyer showed Levisen the final product before shipping off the entry for the competition, the piece had left Levisen floored and “speechless.”

“There’s no other words to describe it,” he said. “He hit all points in application. One look at it, and you wonder ‘how can you not be engaged?’ It just shows that people can be engaged with art at the individual level, and now at the national level, and see how much of a power art can have.”

Now that Quitmeyer is looking ahead at his future, he still plans to continue having art be a part of his life in some shape or form. He reflected on his past years in Austin High School’s art program and felt that because of the district’s push to cultivate interests in students and building techniques, he was able to experience the growth of becoming an artist.

“My favorite thing really is how the school cultivates students, that’s really important,” he said. “They really work with you in building up your interests and letting you build your skills. There’s a lot of mediums and techniques you can learn, and colored pencils was mine. There is a whole range of possibilities.”

“I’m very proud of him,” Levisen said. “I’m proud of Tyler, not only as a student, but as an individual who shows that you can take an idea and run with it. He made changes to be successful. He took something he hated and turned it into something amazing. I have no doubt that Tyler will do far greater things in his life, and I hope he enjoys every moment of it.”

On Tuesday night, the Turtle Creek Watershed District board members and staff received a plaque from the Minnesota Association of... read more