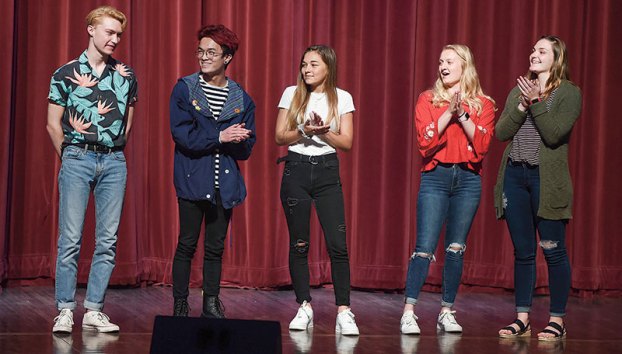 Quitmeyer named Artist of the Year

It has been quite the year for Tyler Quitmeyer, who was named Austin High School’s 2019 Artist of the Year on Wednesday afternoon.

When his name was announced as the winner, the senior’s mind went blank as his fellow students and four of the other Artist of the Year candidates gave him a standing ovation.

For winning the top award, Quitmeyer received a $1,000 scholarship to use for his art.

Having envisioned being on the stage since freshman year, the end of his journey at AHS seemed picture perfect with the final awards ceremony.

“It’s a lot of emotions all at once,” Quitmeyer said. “I feel happy, but also sad for my friends who also tried to go for the same thing. Everyone worked so hard. Since freshman year I wanted to be on that stage. It’s cool to see that actually happen for me and seeing everything culminate toward that.”

Quitmeyer’s artistic journey during his senior year culminated into statewide and nationwide recognition. He was named first runner-up for the Minnesota Junior Duck Stamp Competition and was recently honored as the winner for the Congressional Art Competition, where his artwork will be displayed at the U.S. Capitol for an entire year for lawmakers from all over the nation to see.

The decision of naming Quitmeyer as Artist of the Year was one that art educators at the high school didn’t take lightly. They had to take into account the entirety of the student’s work, video submission and overall commitment to the arts, and each candidate had something to offer.

“Tyler has successfully surpassed the bar in each criterion,” said Jake Levisen, Quitmeyer’s art teacher. “It was a really hard choice. He continues to work passionately and this year has truly been one of the hardest years to judge. He’s also very receptive and open to honest critiques. If there’s something we think he can grow in, we pushed him and he always rises to the occasion.”

What gave Quitmeyer the edge in the process was his desire to constantly improve. Robin Brown, the photography teacher, stated that Quitmeyer’s Artist of the Year video had been “pretty honest” about his artistic vision as being one that makes him fulfilled.

“He does art because it makes him happy,” Brown said. “Each student peak at different rates and grows at a different pace. I don’t think Tyler has peaked yet. I think he will continue to grow. He’s passionate about his work, and really uses his love of the media to self-motivate to improve. He’s inquisitive and it plays into his art.”

Now that the school year is drawing to a close, Quitmeyer wanted those who were also inspired to go for Artist of the Year to try.

“No matter what, work hard,” he said. ““It’s been a long process. But, I’m proud to see how far I’ve come and grown as a person, as well as an artist. I’m proud of where I am today.”

Austin Police Chief David McKichan is advising retailers and those doing private transactions to be aware after someone attempted to... read more