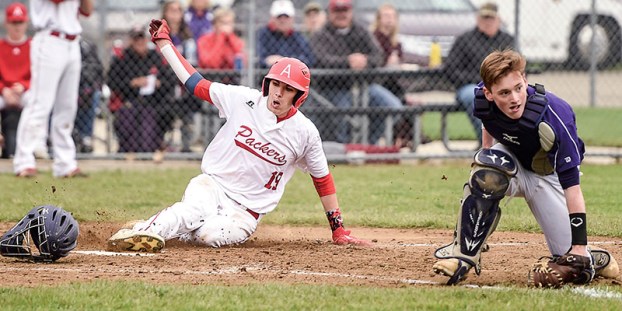 Austin senior Hunter Guyette is willing to do just about anything to get the Packer baseball team to the state tournament — even if that means leaving his favorite outpost.

Guyette did a little catching and pitching, helping lead the Packers to a 5-2 win over Red Wing in a Section 1AAA Tournament game in Marcusen Park Tuesday.

The win brings Austin within two wins of the Minnesota Class AAA State  Baseball Tournament and it ends the season for Red Wing (9-11 overall), which beat Austin in the Section 1AAA title game last spring. 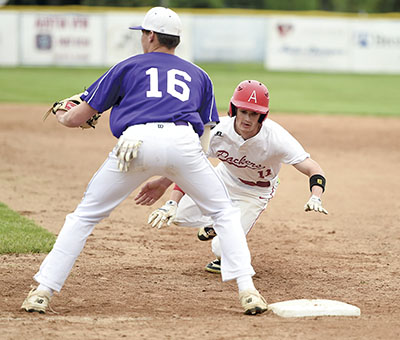 Austin’s Andrew Schumacher dives back into first against Red Wing in the Section 1AAA Tournament at Marcusen Park. Eric Johnson/photodesk@austindailyherald.com

“That’s the team that took us out of it and kept us from where we wanted to be last year,” Guyette said. “Unfortunately we had to end their season, but we’re happy and we’re going on to where we we need to be.”

Guyette went two-for-four with an RBI at the plate and he picked up the save in two innings of relief. Teyghan Hovland pitched four scoreless innings to start the game for Austin (12-8 overall) for Austin, but the Wingers rattled off four straight hits to pull within 5-1 in the top of the sixth inning. Guyette took the mound with bases loaded and no outs. He retired three Wingers in a row, keeping Austin ahead 5-2.

“You always want to be strong at catcher, pitcher, shortstop and center field,” Austin head coach Joe Kroc said. “It’s tough to get (Guyette) out of his best position, which is catcher, but we need some arms to shut the door. He just has that mentality where he’s going to come in and throw it at guys. I thought he did a tremendous job.”

Austin took a 2-0 lead in the bottom of the first inning when Guyette beat out an infield single for an RBI and AJ Mueller hit a sacrifice fly. Austin added three more runs in the fourth when Andrew Schumacher and Michael O’Connor each knocked in a run.

“We played as a team. We picked each other up and everyone contributed in this game. That’s been the key this entire season,” said O’Connor, who went two-for-two. “It’s always fun coming (to Marcusen). Everyone knows what the atmosphere is like and we all have fun playing here. When he have fun as a team, we really get stuff done.”

Austin did most of its damage against Red Wing pitcher Marcus Walms. The Packers had just five hits in the win, but they drew six walks as a team and were hit by two pitches. 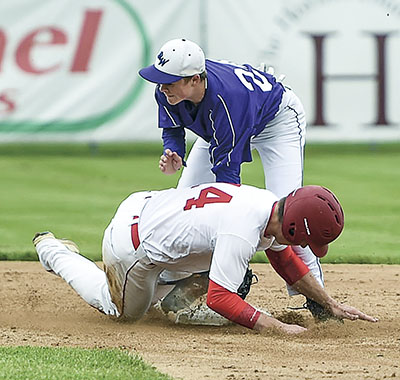 Austin’s AJ Mueller slides into second on a play at second against Red Wing in the Section 1AAA Tournament Tuesday at Marcusen Park. Eric Johnnson/photodesk@austindailyherald.com

“Walms is a really good pitcher and he’s a college level player,” Kroc said. “I knew this was going to be a tough game for us. Red Wing has a heck of a program and a heck of a team and I couldn’t be more proud of our guys and the way we played. We had some really good at bats.”

Top-seeded Austin will host No. 4 Albert Lea (7-12 overall) at 11 a.m. Saturday in Marcusen Park. The Packers split a doubleheader against the Tigers on April 16.

If the Packers win their next two games, they will be state bound.

“This is home,” Guyette said of Marcusen. “Every kid at the youth level always pictures themselves playing at Marcusen under the lights and being able to play here in my last year of high school is an honor. Hopefully we can get two more and send the city of Austin and our team to the state tournament.”

Lyle-Pacelli stays alive with a win over USC