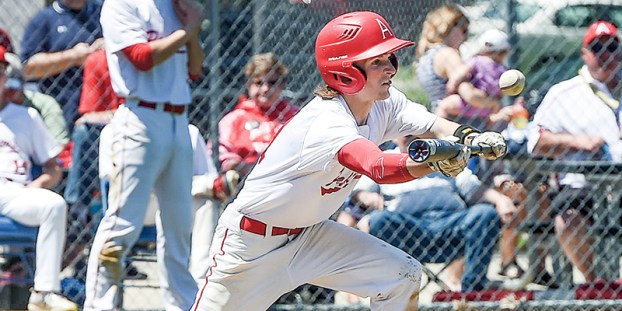 Austin’s Andrew Schumacher lays down a bunt against Kasson-Mantorville Saturday in the Section 1AAA Tournament at Marcusen Park. Eric Johnson/photodesk@austindailyherald.com

No panic, no problem: Packers take down KoMets

There is no panic in these Packers.

The top-seeded Austin baseball team shook off a nightmare start and wrangled control as it powered past No. 6 Kasson-Mantorville 10-1 in a Section 1AAA Tournament opener in Marcusen Park Saturday.

Austin senior Michael O’Connor struggled with control in the first inning as he walked three of the game’s first five hitters, but the KoMets (5-14 overall) were able to plate just one run in the frame as Tony Ciola came into the game and forced a key double play to end the bases loaded threat. Ciola picked up the win for Austin (11-8 overall), which finished with three double plays and zero errors.

“I just knew I had to throw as many strikes as I could. It turned out pretty good,” Ciola said. “We’re very glad to be back in Marcusen. We love playing in Marcusen and there’s not really any pressure. We’re just having fun playing baseball.”

Austin took the lead in the third inning when Riley Wempner singled in a run and AJ Mueller hit a sacrifice fly. The Packers put the exclamation point in the sixth inning when it tallied five runs on a three-run double by Teyghan Hovland and an RBI double by Nate Murphy.

Austin head coach Joe Kroc was pleased with how his team bounced back from a slow start as the Packers had compiled 11 of their 13 hits over the last four innings. 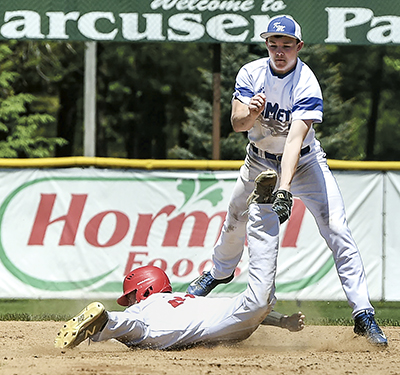 “We tried to simulate in practice, but there were some nerves and in the first two innings we were pressing a little bit,” Kroc said. “We had some better at bats the rest of the way.”

Andrew Schumacher was steady in the lead-off spot for the Packers as he went three-for-four with an RBI. He said the last inning should give the Packers momentum moving forward.

“We just had to stay true to the team and not get to down or to up,” Schumacher said. “We figured we were going to go through rough spots, but it’s all about how you come back to hit and limit the errors.

Austin will play Red Wing (9-10 overall) in the second round of the Section 1AA Tournament in Marcusen Park at 5 p.m. Tuesday. The Packers split the regular season series with the Wingers and Red Wing knocked off Austin in the Section 1AAA Title game last season.

“In my opinion, there are six teams and anyone can win it,” Kroc said. “The one seed doesn’t really mean anything except for who you’re matched up with. We’re going to have to play good baseball the rest of the way out because those other five teams have as good a shot at anyone. I don’t think there’s any pressure because all five of those teams are similar to us. Whoever plays and executes well is going to win.” 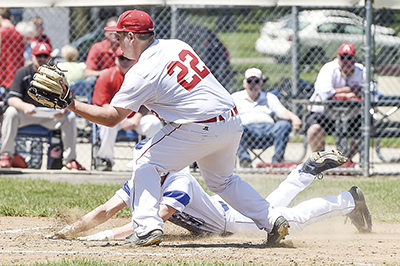 The Hayfield baseball team won the Section 1A West title when it beat Blooming Prairie 8-1 and topped Lyle-Pacelli 10-5... read more